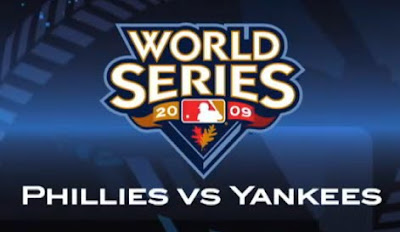 Liberty Series: The Statue vs. The Bell...The Turnpike Series...Broad St. vs. Broadway...whatever you choose to call it, there's sure to be some aspect to interest baseball fans from coast to coast.

There is Pedro Martinez likely getting a shot at starting a game in New York against his familiar foes. Pedro battled New York many times, as a member of the Boston Red Sox. Martinez has thrown more innings against the Yankees than he has against any other opponent. Pedro has held the Yankees to a .211 batting average against in 32 regular season starts.

There is the angle that the Philadelphia radio heads seem to think is so important...beating the Yankees would solidify the Phillies' place as a true dynasty, because of New York's storied past. The Yankees will be playing in their 40th World Series. The Phillies have reached just their 7th.

There is the angle that my boys on The Shore Sports Report love to stress...if the Yankees are going to win it all, it's got to be against the Phillies, because "to be the man, you've got to BEAT the man." Ric Flair said that phrase thousands of times, but the action only needs to be done once (well, 4 times really, in this case).

And of course, let's not forget that rematch of the 1950 World Series. That's a good one too, even though the national media is exhausting it. Pick your favorite story, phans, and nestle in for a good time.
-----------------------------
The Camden Riversharks have hired Von Hayes as their new manager. Read about that here.

Anonymous said…
Cool article as for me. I'd like to read more about this theme.
BTW check the design I've made myself A level escort
November 18, 2009 at 6:38 AM