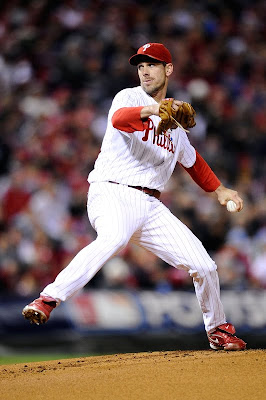 Cliff Lee hurled another sparkling gem while big offensive blows from Ryan Howard, Jayson Werth, Carlos Ruiz, Pedro Feliz and Shane Victorino buried the Dodgers, and the Phillies took a 2-1 series lead in the National League Championship Series with an 11-0 victory on Sunday night.
Lee dazzled the crowd and embarrassed the NL's leading hitting ball club with 8 shut out innings. Lee allowed just 3 hits as he lowered his post season ERA to 0.73 in 3 starts.
It was a historic night in South Philadelphia. Not only did the Phillies' 11-0 win set a mark for largest margin of defeat in the team's post season history, but Ryan Howard also set the all time MLB record for consecutive post season games with an RBI (in a single post season) at 7. Howard learned of the feat after the game when TBS correspondent sharp dressing Craig Seger asked him about it. Howard was suprised and admitted it was quite an accomplishment.
Los Angeles starter Hiroki Kuroda, who had some solid success against Phillies batters entering the game, only lasted four outs as the defending World Series champs hammered him early and tagged the righty for 6 runs and 6 hits, including a Ryan Howard 2 RBI triple and a massive homer off the bat of Jayson Werth in the first inning.
Matt Kemp spoke to the media after the game and was fully aware of LA's shortcomings against the Phillies in game 3. "They did everything we didn't do tonight", Kemp said following the game.
The two teams will meet again, Monday night at 8:07pm in game 4 of the series when former Phillie Randy Wolf matches up against current Phillie Joe Blanton. 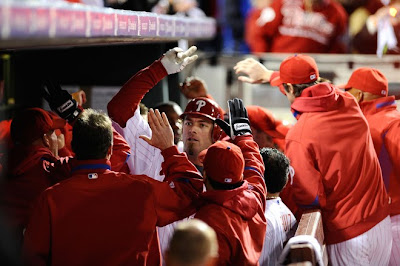