By Jay Floyd October 02, 2009
The National League playoff participants are all decided. The Rockies clinched a berth in the postseason, with a win over the Brewers on Thursday. All that is left is playing out the weekend to decide each team's place and seed.
The Rockies or the Dodgers could be the Wild Card entrant. Colorado is 2 games behind Los Angeles, and the teams will be going head to head for three games. Colorado needs to sweep to win the West Division. The Phillies and Cardinals have qualified also as the champions of their respective divisions.

With three games left for everyone, the Dodgers enjoy the best record at 93-66. The Phillies are a game behind, at 92-67. The Cardinals have the same record as the Rockies at 91-68. The team with the best record after Sunday gets home field advantage for the division series and the league championship series. Home field advantage for the World Series is decided by the league that wins the all star game, as most of you know.
The tiebreakers for best record/#1 seed are decided by head to head record, and go like this-
Phillies and Cardinals tie...Phillies get 1 seed, based on 4-1 record vs. Cards.
Dodgers & Phillies tie...Dodgers get 1 seed, based on 4-3 record vs. Phillies.
Dodgers & Cardinal tie...Cards get 1 seed, based on 5-2 record vs. LAD.
If there is a three way tie for best record, the tiebreaker is combined record vs. the other two teams. Best record was 7-5 by the Phillies who would get the 1 seed. Next is 6-6 by St. Louis, who would be the 2 seed. 3 seed would go to the Dodgers, who were 6-8 against the other two teams.
If the Rockies or Dodgers finish the season with the best record, the 1 seed would not play the 4 seed, which would be the Wild Card team. MLB rules state that teams from the same division can not meet in the first round. In that case, the 2 seed would meet the Wild Card.
------------------------ 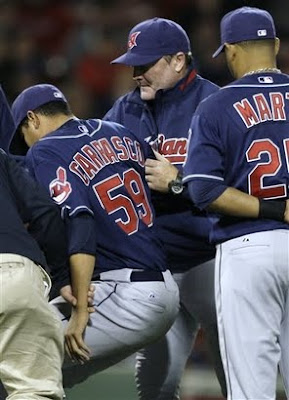 Phormer Phillie Phlash: Carlos Carrasco and his 8.87 ERA were hit with a Jacoby Ellsbury line drive on Thursday night. Carrasco left the game and took the loss to the Red Sox, dropping his record to 0-4 in 5 ML starts.