Phillies Going Back to Cali

Head to head in 7 games during the 2009 regular season, the Dodgers won 4 games, while the Phillies won 3.

To advance, the Phillies will need Cole Hamels to return to 2008 form. Hamels is expected to start game 1 in LA. Hamels went 2-0 in the LCS last year, allowing just 3 earned runs in 14 innings, en route to being named Most Valuable Player for the series. Hamels went 4-0 in 5 starts last October with a 1.80 ERA.

The Phillies hope that the world has witnessed the reemergence of closer Brad Lidge. With a newly added pitch, a cut fastball that Lidge introduced during the final week of the regular season, and his slider apparently back to being as sharp as it was last year, Lidge has strung together five consecutive scoreless outings and notched two saves in the division series against Colorado. Lidge blew two saves in LA, when the Phillies played there in June. He spoke last week about the postseason being a clean slate. Brad is hoping to keep that slate clean.

Games times for the series look like this...game 1 on Thursday is scheduled for 8:07pm EST, game 2 on Friday is at 4:07pm EST. All remaining games are slated to start at 8:07pm EST. Games 3, 4 and 5 (if necessary) in Philadelphia will be played on Sunday, Monday and Wednesday. 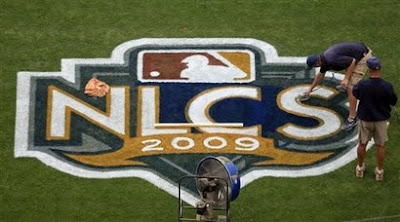 Check back here daily for steady postseason coverage. And don't forget PhoulBallz Phillies Wednesdays brought to you by The Shore Sports Report. Simulcast on Fox Sports 1310am and WOBM 1160 in New Jersey, The Shore Sports Report with Joe & Mike is on every weekday from 3-6pm. I should be on today around 3:20pm. Check it out over the air waves, or online with their live stream HERE.