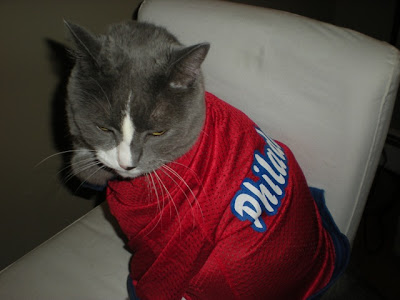 The Dodgers won game 2 of the National League Championship Series. Second guessing moves made by Charlie Manuel, specifically removing Pedro Martinez from a game in which he was throwing a 2 hit shut out, won't do any good. Writing about Chase Utley's throwing error that extended a key inning for LA, for the second time in two days, can't improve the Phillies' status in this series. Talking about how stunned I am that Vicente Padilla threw extremely well against the Phillies in the playoffs will only aggravate me. Instead of reviewing the game that ended poorly, I offer these pictures of a cat nicknamed "Bird" wearing a Ryan Howard jersey. Get Bird to the plate, boys! 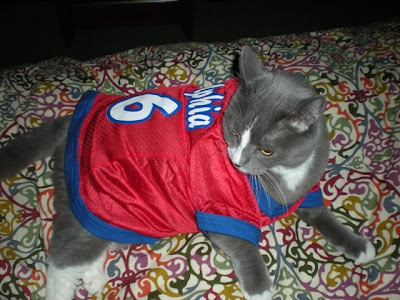 Jay Floyd said…
Hey gang, if you like this post and wish to have your Phillie'd-out pet featured on PhoulBallz.com, shoot me an email with your animal phan to- PhoulBallz@verizon.net!!
October 18, 2009 at 12:41 PM