Drabek Preparing For Next Step 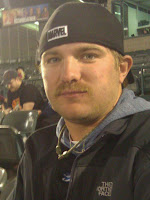 The transition has been easy for Kyle Drabek. In December, he was part of a package of young prospects that was traded to the Toronto Blue Jays for ace pitcher Roy Halladay. Now, as though nothing has changed, he's right back where he was last season...the star prospect on the pitching staff of a team in the Double A Eastern League.

Drabek has often stated that he wanted to stay in the Philadelphia organization, who drafted him in the first round of the 2006 amateur draft. The 22-year-old thought after the midseason trade rumors, that surrounded him possibly going to Toronto last year, passed with no action that all the turmoil was over and that he could simply relax and focus on getting to the big leagues with the Phillies. That wasn't the case, as the deal eventually came to fruition over the off-season.
In the Blue Jays system this season, Drabek doesn't have to worry about being dealt. He only has to concern himself with opposing batters and working on his secondary pitches to compliment his electric mid-90's fastball.
Thus far, Drabek's season has been right on par with where the Toronto organization and Kyle, himself, would like it. Through 4 starts, Drabek has a 3-1 record with a 3.80 ERA with the New Hampshire Fisher Cats. On his early success, Drabek gave props to his offense for getting him the wins. "My first three games, I gave up quite a few runs (3 earned in each start). Luckily we have a good team and we scored a bunch too, so that helped me out."
Pitching coach Tom Signore, who describes Drabek as "a special talent", has worked closely with the young pitcher on changing speeds. Drabek has developed two different change ups, a four-seam and a two-seam which Signore has seen progression with already. The combination of the two variations gives Drabek a familiar looking change up (the four-seamer) and one that is more of a weapon against lefty hitters (the two-seamer). Signore also has Drabek working on pitching inside to opposing hitters and getting them out earlier in the count, in order to go longer in games.
His pitch repertoire is not the only thing that Drabek has been able to develop. His maturity level seems much improved over last season as well. Speaking about Drabek's growth, Signore said, "When there are rumors about you being traded, that can be very unsettling for a 10-year veteran, never mind a 21-year-old minor leaguer. He's a very mature kid on and off the field. We've been pleasantly, pleasantly surprised with his aptitude."
Signore admitted that last season, when Drabek shut down the Fisher Cats, as a member of the Reading Phillies, it was enjoyable to watch the talented right-hander. "It sounds crazy, but it's almost fun to watch somebody with so much talent. It may be an opponent and even though he's doing it to your team, it's fun to watch," Signore said.
Drabek remembers his time in the Phillies system fondly and credits plenty of Phillies personnel with helping him get to where he is today. Drabek mentions Gorm Heimueller, the Phillies pitching coordinator, Carlos Arroyo, the Gulf Coast League pitching coach as well as former Lakewood pitching coach Ed Hodge for being key in his development during his early days as a professional. "It was great to learn from what they knew. It was a lot of fun," Drabek stated.
While Drabek once loved the idea of reaching the big leagues for the newest National League powerhouse, the Phillies, he now looks forward to moving upward in the Toronto organization and has come to appreciate his new home in Manchester, New Hampshire. "When I played there on the road with Reading, they always had a lot of fans and it seemed like they were always behind their team. So, I'm looking forward to having that throughout the season."
It's a sure thing that Fisher Cats fans are looking forward to having Drabek this season too, just as Blue Jays fans are anticipating having him throughout many seasons to come.
------------------------------
You can follow PhoulBallz.com on Twitter HERE.

Mattt said…
This is great stuff. Asa Toronto resident it's awesome to read your take on Drabek. I hope he moves through the system quickly.
April 30, 2010 at 2:06 PM