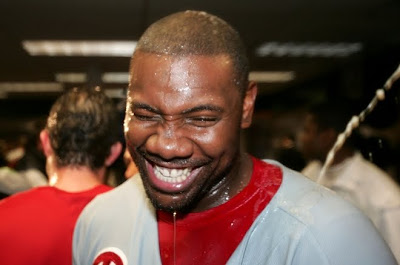 It's a quote to go down in Phillies history. Spoken to his team mates, with the utmost confidence, by one of the biggest offensive threats in the league. Spat with the swagger of twenty rappers. Stated like he knew exactly what would happen. Delivered like a true World Champion.

Ryan Howard has been using a song called "Forever" by hip hop sensation Drake as his walk up music since the home stand that began on September 28th. The snippet of the song that plays begins with Drake's first words of the opening verse of the track..."Last name Ever, first name Greatest." Could be true...for Howard, not for Drake. Drake is brand new to hip hop...a rookie. Howard, however, is experienced...an all star, a league most valuable player and is already widely considered the best first baseman in Phillies team history and he could go down as one of the best offensive players the game has ever seen by the time he is done playing. On Monday night, Howard's attitude in approaching his 9th inning at bat was that of someone who is certain of his place as great. Howard wanted an opportunity to turn the game back around and he executed, once the chance was his.

Entering the 9th inning, Howard went to his team mates in the dugout and told them, "Get me to the plate, boys." They got him there, and that statement became material for phans to pass down, or to smile and shout about over a beer, or to call talk radio and praise, or to "blog" about.

After Ryan Madson blew the Phillies' 2-1 lead in the bottom of the 8th inning, and the Rockies went up 4-2, the Phillies put together a 2 out 9th inning rally that resulted in thousands of Colorado fans crying into their knockoff rally towels. After Greg Dobbs struck out, Jimmy Rollins hit a single. Shane Victorino stepped to the plate and grounded into a fielders choice. Chase Utley then walked with 2 outs, setting the stage for Howard's clutch double off of Rockies pitcher Huston Street that scored both runners and tied the game. The highest paid player on the team earned his check and stopped what many viewers momentarily thought was an inevitable trip back to Philadelphia for game 5 of the division series.

That was not to be, as Jayson Werth followed Howard's double with a well placed single off of Joe Beimel that gave the lead back to the defending World Series Champion Phillies.

Scott Eyre and Brad Lidge combined to record a scoreless 9th inning and the Phillies advanced to the National League Championship Series for the second straight year to face the same opponent they defeated there last year, the Dodgers.

Phillies pholk lore can happen at any time and will always be worth the wait. Think Matt Stairs' homerun in Dodger Stadium in the 2008 NLCS. Think Mitch Williams' game winning hit against Trevor Hoffman to end that double header at 4:40 AM in July, 1993. Think Jim Bunning's perfect game on Fathers' Day, 1964. Think Dick Sisler on the final day of the 1950 season, winning the game and the pennant with an extra inning homer. Those are stories Phillies phans will always tell. So is this. 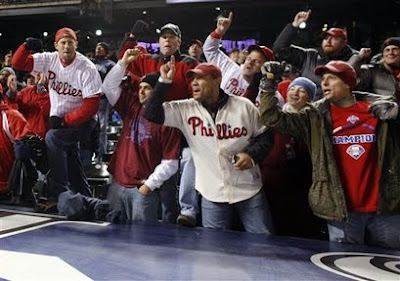 Dan Eubank said…
Good article my man. i was going crazy as this happened. You built it up so well i was cheesin reading it remembering how happy i was watchin it. Ryan Howard is my hero!
October 13, 2009 at 4:15 PM

Jay Floyd said…
Thanks for the kind feedback.