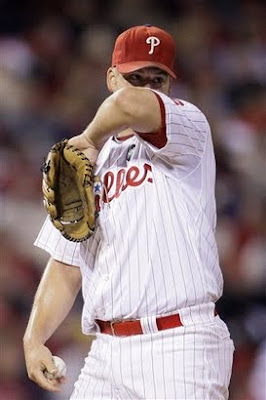 Perhaps the Phillies don't realize that there are still reasons to win these remaining games. If they lose out this weekend and end up with the worst record among the division winners, they will go on the road to face the West division champions in the first round. And surely the Phillies must realize that the Marlins won't roll over, and still have something to play for...second place. For second place teams that don't make the playoffs, bonuses per team member can exceed $10,000. Marlins players and coaches want bonus money. Don't get it twisted.

The forecasted Phillies' first three starters for the post season are Cole Hamels, Cliff Lee and Joe Blanton. This group of fellows who had been awfully hot in the mid to late summer haven't been so hot lately. Here's a look at recent samples for the top three guys.

Sure, the Phillies offense has carried them for stretches this season, but through August and into September many experts, analysts and fans thought the Phillies' starting pitching could match up to the strong Cy Young Award candidates, Adam Wainwright and Chris Carpenter, of the Cardinals. At this rate, the Phils' rotation would have to rely on the offense to carry the team.

Be sure to check out this tribute video from Macho Row. Solid stuff.