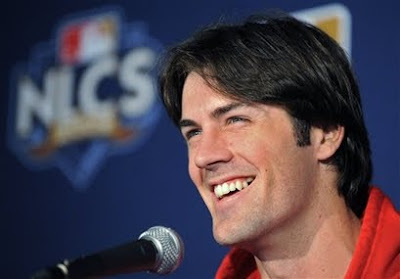 Woooooahh, it's the rematch! The National League Championship Series has the same opponents this year that it did last year.

There is certainly lots of anticipation this year, after the Dodgers added a few phormer Phillies that weren't with the club last time around. Currently occupying roster space for the Dodgers are Randy Wolf, Vicente Padilla and Jim Thome. Eric Milton is also a Dodger, but has been on the disabled list since June. Add those players to the ex-Phils on the Los Angeles coaching staff, Larry Bowa and Mariano Duncan, and the Dodgers have quite a collection of guys with Philadelphia ties. Is Ed Wade secretly overseeing this team in addition to the Astros?

Read on for details on the pitching match ups and additional information from this series.

Roster predictions made by me during my radio segment this week appear to be partially correct. I was correct in saying that Chan Ho Park would be added to the active roster for this series. I was wrong in stating that Eric Bruntlett would continue to be left off of the roster for the NLDS. Furthermore, they'll be taking the places of Kyle Kendrick and Brett Myers (both guys I suggested could be replaced by Park). Only 11 pitchers on the roster this round.

Ryan Howard against lefties Clayton Kershaw, Randy Wolf & Hong-Chih Kuo is a combined 2-for-20 (.100 avg), in his career. Howard's OPS was 435 points lower against lefties than it was against right handers this season.
Carlos Ruiz hit .571 with 3 doubles and 1 homer in 7 games against the Dodgers this year. Ruiz has a .279 batting avg. in 21 career post season games. Chooch's 4 hits in this year's NLDS matched his total from the previous 2 seasons in the NLDS.

Dodgers rookie reliever Ronald Belisario had a 1.21 ERA after the all star break. Belisario allowed 16 earned runs all season...the Phillies scored 2 of those runs in just 3 innings against him.
In 24 games against the Phillies, James Loney is a .362 hitter with a .934 OPS. Loney is a .348 hitter in 12 career playoff games.
Manny Ramirez, from September 1st till the end of the season batted just .218. His batting average this season was 57 points lower at home than it was on the road. 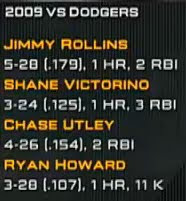