By Jay Floyd October 08, 2009
The first of the Phillies' two "aces" threw a gem in his post season debut on Wednesday. Cliff Lee sailed through the first 8 innings of the 2009 playoff opener against the Colorado Rockies, before surrendering an RBI double to Troy Tulowitzki in the 9th inning. Lee, the reigning American League Cy Young Award winner, also recorded the first stolen base ever by a Phillies pitcher in the post season, when he singled and stole second base in the 3rd inning.
Following their 5-1 win in game 1 of the NLDS, the Phillies are now 8-0 at home in the postseason since they were swept by the Rockies in the opening round of the 2007 playoffs.
Each of the Phillies 9 batters notched at least one hit on the day. The 4, 5 & 6 batters (Ryan Howard, Jayson Werth and Raul Ibanez) had 2 hits each.
The Phillies will go right back at it for game 2 against the Rockies at 2:37pm EST. Starting for the Phillies will be that other "ace", Colbert Hamels.
----------------------------------
Links for you on this phine day...
A 12 year old girl sues the Phillies for Ryan Howard's 200th HR ball. Click here to read about it.
Larry Shenk is asking some all time great Phillies about their memories of post season baseball. Check out his blog by clicking here.
Shay Roddy's Phillie Phanatics has an all star lineup of Phils bloggers taking part in a round table discussion about the post season. Have a look at that here.
----------------------------------
Some pictures from NLDS game 1- 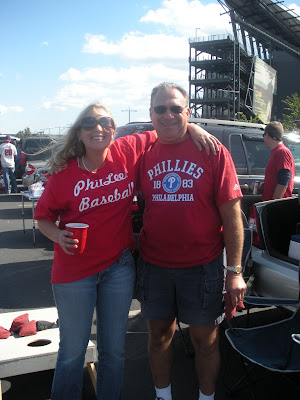 Heather, pictured with pop Barry, was spotted in her PhoulBallz Cliph Lee shirt 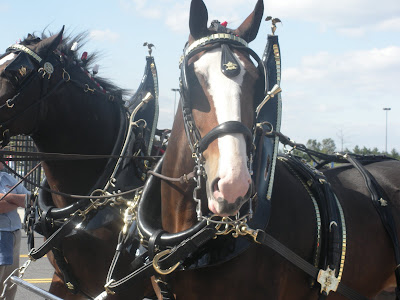 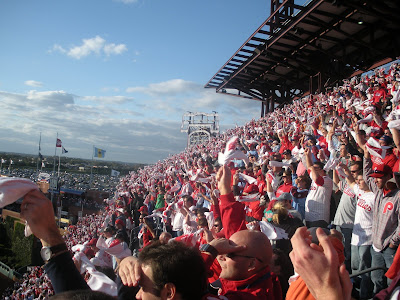 Happy birthday to my uncle Ralph! He took me to my very first game in 1981 and I remember seeing Pete Rose play that day, because Ralph pointed him out to me. Ralph is the reason I love the Phillies...and also the reason I eventually came to bring you all this blog, as well as all the interviews, radio segments and fun times that go along with it.
The Phillies aren't doing any scoreboard announcements during the postseason, so this will have to do. Much love to my uncle, as he turns 51 years OLD.