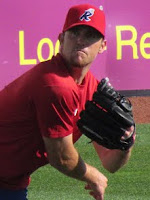 TRENTON, NJ- Brad Lidge made his second rehab appearance for the Double A Reading Phillies on Thursday night and it didn't go as well as the veteran reliever or the team had hoped. Lidge struggled with his command and turned in a rather poor outing for the club that entered the night in a playoff race, 1 game behind division rival Trenton for the Wild Card spot in the Eastern Division.

On the disabled list since spring training with a strained right rotator cuff, Lidge experienced an elbow strain when he was working back from that issue in late May.

In his outing against the Yankees affiliate in Trenton, Lidge displayed difficulty with his control as he threw three wild pitches, hit two batters, walked another and gave up a single, all while letting up two earned runs on 28 pitches in 2/3 of an inning.

After the disappointing performance, Lidge was composed and focused on some positive aspects, having reached 89 and 90 MPH on scouts' radar guns, according to some reports.

"It was a step up for my velocity, it was a step back for my control. But we've got some outings (left) to work on that," Lidge said. "It was a poor outing control wise, but it was a good outing because I felt healthy."

The 34-year-old right-hander threw a scoreless inning earlier this week as Reading played host to the Thunder. He's seen progress in his own pitches and was not discouraged by his rough second outing against Trenton.

"I'm in the area now, where I feel like my stuff has gotten just about all the way back," Lidge stated. "My control is not quite where I want it. Surprisingly, my first couple outings, my control was real good, and tonight it wasn't, so it's kind of more of a realistic- I'm not quite there yet."

Lidge is targeting a return to the Phillies on Friday, July 22nd, following three more rehab appearances. The plan currently has Lidge pitching in back to back games with Reading at Trenton on Saturday and Sunday. He would then rest for two days and pitch again the following Wednesday, possibly at Lakewood.

As for what role Lidge could fill the rest of the way for the Phillies in 2011, that is not clear, but Lidge was sure that he'll simply try to do his best, no matter which inning he pitches or what assignment he receives.

"The way I view it is, I want to let (Phillies manager) Charlie (Manuel) know that I'm healthy to throw any outing, any time of the game that he wants me to throw," Lidge said. "I'd like to be able to get all the way back and be able to close again, but this year Madson and Bastardo have done an outstanding job and I want them to continue to do an outstanding job, so that we can keep winning games. There's no other way to look at it." 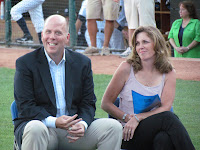 On a more positive note, the Thunder held a pregame ceremony to honor current Phillies television play-by-play man Tom McCarthy, who was Trenton's original radio voice, and inducted him into the Trenton Baseball Hall of Fame. The team also named the home team broadcast booth after McCarthy, who attended the event with his wife Meg and their sons.

"It's unbelievable," McCarthy told the media following the pregame ceremony on the Waterfront Park field. "I am unbelievably humbled by everything...the whole thing. The radio booth part of it is just remarkable, it really is. But I will cherish it and the moment more than anything else that I've had."

McCarthy, who joins DeMarlo Hale, David Eckstein, Tony Clark and Nomar Garciaparra, among others, in the Trenton Baseball Hall of Fame, said that earlier in the day he had gotten some joking words of encouragement from one of his broadcast partners, former Phillie Gary "Sarge" Matthews Sr. The tip didn't help much, however.

"Sarge said to me today, 'Make sure you don't cry.' I said, 'I'm not gonna cry, Sarge!' Well, I felt myself...I was pretty teary, I really was. I was pretty teary, because I think about all the people that were such a big part of this. Whether it be Jim Maloney, Sam Plumeri, or Larry O'Rourke, you know, people that aren't around any more. People that, in their own way, all had an impact on the success of this franchise."