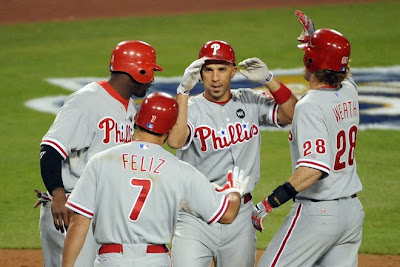 The Phillies won the 2009 NLCS opener on Thursday to take a 1-0 lead in the final four round to determine the contestants for the World Series. The Phillies were led by two key three-run homeruns by Carlos Ruiz and Raul Ibanez and got solid relief pitching from Chan Ho Park and Brad Lidge.
Ruiz is making a bid to add to his own nickname collection. The man already known as "Chooch", who TBS renamed "Cooch" by accident last year, has made a bid for a brand new name, "Senor Octubre". I'll simply go with my adjusted alias, THE Chooch. Ruiz in 6 career NLCS games has a .368 batting avg. THE Chooch's 3 run homer in the 5th inning gave the Phillies a lead they would not relinquish.
In the bottom of the 7th inning, lefty Antonio Bastardo entered the game to face left handed batting Andre Ethier, who smashed a lead off double. Chan Ho Park then entered the game and tossed a sparkling inning, retiring Manny Ramirez, Matt Kemp and Casey Blake in succession, without allowing any damage.
Raul's 8th inning HR off of lefty reliever George Sherrill gave the Phillies a cushion to work with. It was the first homerun Sherrill allowed to a lefty batter since June 14, 2008. The insurance runs would prove necessary as Ryan Madson gave up two runs to LA in the bottom half of the inning, making the score 8-6.
In the 9th inning, Lidge successfully converted another save to open the NLCS. Lidge's current 7 game scoreless appearance streak is his longest of the season. Lidge's post season ERA as a Phillie, in 12 games, is 0.77.
Game 2 will be played today, starting at 4:07 EST. Former Dodger Pedro Martinez takes the hill for the Phils.
Speaking of former Dodgers, a tip of my PhoulBallz goes out to Phillies first base coach Davey Lopes who refused an opportunity to celebrate a Dodgers team of the past by rejecting an offer to toss out a ceremonial first pitch prior to NLCS game 1. Lopez turned down the offer, stating that he is a Phillie and didn't wish to participate in anything celebrating their opponent, the Dodgers. As Lopes explained to Martin Frank of The News Journal, he has no ties to the Dodgers any longer, "There's nobody left from when I played. I don't know the players. I don't know the coaching staff. I don't know the owners."
--------------------------
You should follow PhoulBallz.com on Twitter HERE!