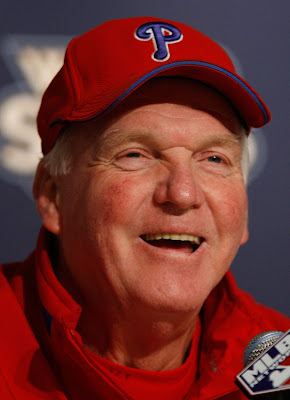 Finally, the World Series has come back to New York City! The Phillies are in New York to defend their World Championship against a new challenger, the Yankees. Read on for pitching match ups and other key notes from this series.

Pedro Feliz is 4-for-28 (.143 avg), with just 2 RBI, in his regular season career against CC Sabathia, AJ Burnett and Andy Pettitte.

Don't forget that Wednesdays are PhoulBallz Phillies Wednesdays on The Shore Sports Report. Today, it gets a little more intense than usual when I participate in their week-long Philadelphia vs. New York sports debate series. Tune in around 3:15 pm EST for all the action as it unfolds! Link- here.
PhoulBallz.com's favorite rapper NeeKo has another version of the "Ill State of Mind" track on YouTube with an added verse by TonyTwoStep, with a download link. Check that out right here.
Follow PhoulBallz.com on Twitter HERE!