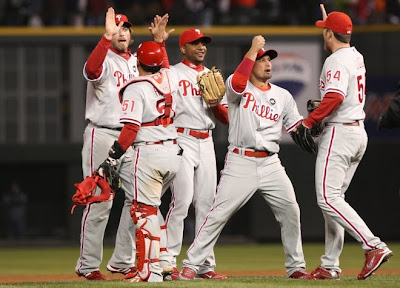 This evening, the Phillies will make an attempt to eliminate the Rockies from the 2009 postseason. It would be the Phillies' second win of the day, as sometime after 2am Eastern, Brad Lidge locked down a save following a Ryan Howard RBI sac fly in the 9th inning, to put Philadelphia ahead 2-1 in the series.

Read ahead for notes on the pitching match up and some additional details from this game.

In 10 career NLDS games, Jimmy Rollins is 11-or-41 (.268 avg) with 2 doubles, 1 triple, 1 HR, 5 RBI and 4 runs scored. Against the Rockies in the NLDS, Rollins is 5-for-25 (.200 avg).
The Phillies' lineup for game 4 consists of the usual suspects- Jimmy Rollins SS, Shane Victorino CF, Chase Utley 2B, Ryan Howard 1B, Jayson Werth RF, Raul Ibanez LF, Pedro Feliz 3B, Carlos Ruiz C, Cliff Lee P.
Scott Eyre left game 3 with an ankle injury. Charlie Manuel had no update on Eyre in his press conference today other than Eyre wasn't limping when Charlie saw him today.