By Jay Floyd October 05, 2009
I was thinking about the role that Jayson Werth plays on the current Phillies roster, and it's a big one. This season, with 36 homers, 99 RBI and 20 steals, Werth had great impact on the Phillies' offense. As I pondered Werth's value, and viewed how he fit in among elite names in the game like Ryan Howard, Chase Utley and Jimmy Rollins as a supporting player, I quickly thought of his eqivalent on that beloved 1993 Phillies World Series team.

Dave Hollins filled that role 16 years ago. Hollins drove in over 90 runs for the National League Champion Phillies. Hollins was a key offensive cog in that 1993 lineup and he became an all star by playing beside the big name players who led that squad...names like Darren Daulton, Lenny Dykstra and John Kruk. 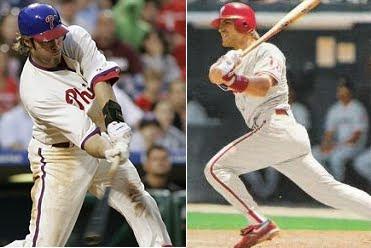 Werth's 2009 season matched up against Hollins' 1993 season isn't overly comparable, but things balance out. Werth displayed more power, while Hollins hit for a higher average. Werth walked a bit more, while Hollins had a few more doubles. Werth showed more speed on the bases and Hollins led the league in time outs while batting to do deep knee bends to stay loose. It's all pretty close.

Tuesday update- Hollins has been added to the Phillies' scouting staff.