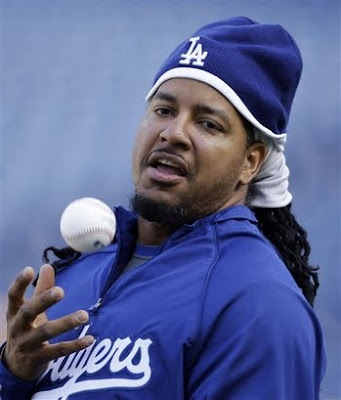 Have you heard the one about the performance enhancing drug user who ditched his team in the playoffs to take a shower and get ready to leave the ball field? No? Oh, well then you missed today's news about Manny Ramirez.

Radio stations all over the region, and sports writers from coast to coast laid into Dodgers outfielder Manny Ramirez for taking to the club house during Monday night's game 4 of the National League Championship Series, after he was removed for a defensive replacement, in order to disrobe, shower and perhaps attempt to dodge the press. On Sunday night, Manny was asked by a reporter about Philadelphia phans having the notion he had taken steroids, following chants from the crowd asserting the concept. All Manny could say was, "Next...".

With a 1 run lead in the 9th inning, on Monday night, it seemed that Manny felt that the game was locked up and the Dodgers were sure to tie the series and force at least one more game back in Los Angeles. Ramirez didn't feel like that warranted sticking around to celebrate with his teammates. Washing up and getting changed was priority #1. In the end, the Phillies executed an improbable comeback and won the game with 2 outs. Ramirez had missed it entirely.

uncle al said…
Lets be honest...Manny has NEVER been a team player. He pulled his manny crap in Boston too. The dude has and always will have an over-inflated ego. AND, is his defense, a shower should be his number one priority...after all, it takes alot of effort to wash his stinky attitude every day.
October 21, 2009 at 10:32 AM

mvr joe said…
Well cole left the stadium not too long ago, but that should be an excused absence. Indeed mr. ballz, the phils just don't act like this.
October 21, 2009 at 3:43 PM