By Jay Floyd February 07, 2009
Weekend greetings to you phine pholks out there. Today's post features pictures of rappers wearing Phillies caps. Why rappers in Phillies caps, you ask? Because... Any other questions? 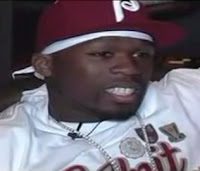 We will start things off properly by going with a highly recognizable hip hop star. 50 Cent stays constantly relavant by consistantly creating radio friendly material to help sell (G) units, while he "keeps it real" by still rapping about the thug life he lived before becoming the 2nd highest earning black entertainer in America. 50 is seen here in a recent interview rocking a throw-back Phillies cap.

Next up we'll use a throw-back screen cap from what may be the very first major appearance by a rapper wearing Phillies gear. Chuck D, of legendary rap group Public Enemy, wore a Phillies cap in the music video for rap anthem Fight The Power in 1989. The song was the lead single from the soundtrack for Spike Lee's film Do The Right Thing.


Next up we'll go with some home grown talent. Philadelphia's own sons Cassidy, Freeway and The Roots can be seen repping home with Phillies caps from time to time. 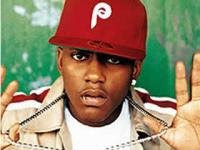 Cassidy, is probably best know for his 2007 post-jailtime Swizz Beats produced single My Drink N My 2 Step. Cassidy is on the Ruff Ryders record label. Cassidy also had another big single in 2004, with Hotel. It featured R. Kelly and reached #4 on Billboard's Hot 100. 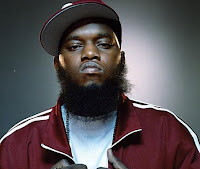 Freeway, is currently signed to Jay Z's Roc-A-Fella record label. Freeway's current single features James Blunt and is called When I Die. Freeway sports one of hip hop's most unique voices and is backed by one of the industry's best labels. 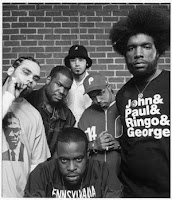 And last, among my home town Philly listings, is The Roots. Two-time Grammy winners The Roots are widely considered the very first and only true hip hop BAND that has seen major success. The guys are proud of Philadelphia and show it by repping their city with home team gear. Rumor has it that Jimmy Fallon has booked The Roots as the house band for his upcoming hosting gig on NBC's Late Night program.

Next up is one of my personal favorites, The LOX/D-Block member, Jadakiss. Jadakiss is currently signed to a solo deal with Roc-A-Fella records. Jadakiss' most notable mainstream recognition came in 2004 when, on his single Why?, he made an assertion that President Bush had a role in the terrorist attacks on September 11th, 2001. 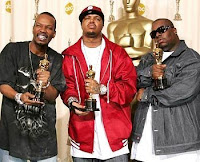 IRONPIGPEN said…
Hmmm. I suppose they could be (I thought they did) wearing Yankees or Mets hats so...nice haircut with the one dude!
February 7, 2009 at 9:06 PM