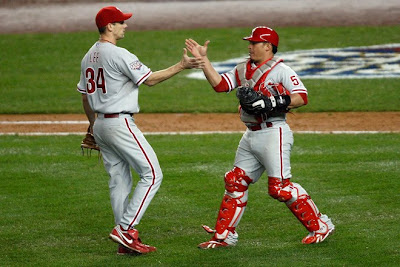 It's how they get down. The Phillies won game 1 of another series. Between the 2008 & 2009 postseasons, the Phillies have not had to play catch up in any of the series they've played. They've won the first game of every series, none of the series have gone more than 5 games, and they've won each of the series.

The duo of Ut-Lee was really all Philadelphia needed to secure a victory over the Yankees, as Chase Utley and Cliff Lee starred for the Phillies. Utley smashed two homers off of Yankee starter CC Sabathia. Utley's first homer of the gave scored the Phillies' first 3rd inning run of the '09 post season. His second homer made history. Utley become just the second lefty hitter, all time, to hit two homers off a lefty pitcher in a World Series game. That other hitter was Babe Ruth in 1928. Lee shut down New York, allowing only 1 unearned run while tossing a complete game. Lee's mixture of pitches dazzled the New York hitters as he struck out 10. Lee added in some noteworthy plays in the field, for good measure. A very casual catch on a pop up was topped off with a behind-the-back grab on a sharp ground ball. Utley and Lee were the stars in game one.

Lee said after the game, "Winning game 1 is huge. Now we have a chance to take both of (the first 2 games in New York) and go back to Philly in a good spot."

I don't look down on bloggers. I am one, among other things. I do however look down on some content that certain bloggers post. (In my best Shabba Ranks accented voice-) Hear me now! I promise that I will never write an article about a player's hair gel. Link- Big League "Poo".