Pat Gillick on the Phillies' Secrets to Success 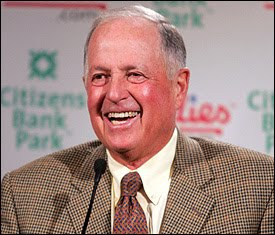 Steve Greenberg reported, in the latest issue of The Sporting News, some comments that former Phillies GM and current "Special advisor" Pat Gillick told him regarding the team's head lock on the National League East. Here are some of those remarks....

Our manager never has a bad day. If we lose a tough one, Charlie comes to the park the next day and he's fine: he's ready to play baseball. That's one of his biggest strengths. Even though Charlie comes off to the public sometimes as this simple guy from West Virgina, those players see him for who he really is. They believe in him. They know he's loyal to them, and they're loyal to him.

We are a very consistent organization. We won't do things, in my judgment, that stray too much from the game plan. I've always felt the nucleus of a winning club has to come from within the organization- Jimmy Rollins, Chase Utley, Ryan Howard, Cole Hamels. When the Yankees were the best team in the league year after year, it was because Derek Jeter, Bernie Williams and Mariano Rivera were that kind of nucleus. I don't think you can win over a long period of time with a collection of free agents.

We've got good ownership. Our ownership is like Warren Buffet- they're investors. They hire professional management to manage the team. ...As far as management, (our owners) leave it up to (team president and CEO) David Montgomery and (GM) Ruben Amaro.

Other quotes by Phillies, regarding the postseason, from the latest issue (October 12th) of The Sporting News...

Cliff Lee: I think we've got the players to be a team like the Red Sox or the Yankees. We have the team and the players to expect to be in the playoffs every year.

Ryan Howard: I think we know we can beat anybody.

Charlie Manuel on how the Phillies' proverbial tanks were still full after the World Series last year: It's like they didn't know it was over. Someone had to say, 'Come on, guys, you won. You can go home.' I know those guys. They had more left. That tells me they'll be ready if they get another shot at it.

Manuel on an unnamed rival GM telling him, at last year's winter meetings, that the Phillies had more heart than his own team: I didn't make a comment either way, but that made me feel good.