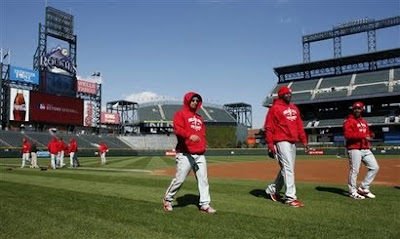 It's 19 degrees and snowing in Denver, so MLB has postponed tonight's game 3 of the National League Division Series. The third game of the only MLB division series that isn't 2-0 at this point will be played tomorrow at 10:07pm, and game 4 that was originally slated to occur in that time slot will be pushed back to Monday. The delay of game 4 would allow Cliff Lee to start that game on regular rest. Read on for details on the game 3 pitching match up and other key notes.


Rookie Carlos Gonzalez is tied with Mark DeRosa of the Cardinals for most hits this postseason. CarGo is 5-for-9 with a double, a steal and 2 runs.

Raul Ibanez is 4-for-8 with 4 RBI this postseason with a double and a run scored.

The weather forecast for Denver on Sunday night is party cloudy with a temperature around 39 degrees.