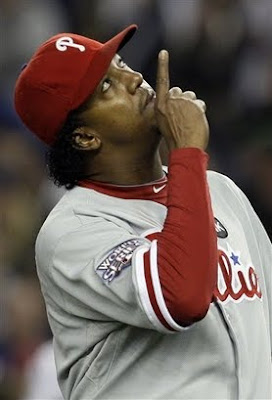 The story of the night, leading into game 2, was certainly Pedro Martinez facing his long time enemies, the Yankees. Much was made of Martinez's history against New York. Pedro was excited for the big stage, saying this is why he chose to sign with Philadelphia...so he could pitch in the World Series.
Martinez was on point in game 2 using a slower, crafty approach to keep the Yankees' lumber in check. Martinez was strong, despite not lighting up any speed guns. His fastballs usually hung around the mid-80's, but who needs velocity, when you've got MARVELocity, like Pedro has?

The only damage the Yankees did for the first five innings was a solo homerun by Mark Teixeira in the 4th inning, which tied the game. Phillie Matt Stairs had driven home Raul Ibanez in the 2nd inning to give Philadelphia the lead.
With 2 outs in the 6th inning, Pedro allowed the Yankees to take the lead in game 2 when Hideki Matsui hit a homerun to right field. Matsui drove a low pitch out of the strike zone deep and it left the field of play.
While Martinez was performing well and keeping the game close, New York righty AJ Burnett was just a notch better as he stole the show...and the national headlines. Stair's RBI early in the game was the only run the Phils would get. Burnett allowed 4 hits and 2 walks over 7 innings while striking out 9. He turned the game over to Yankee legend Mariano Rivera, who closed out the game with a 6 out save, his 10th in World Series play. Rivera's save didn't come without excitement however, as, with 2 runners on in the 8th inning, Chase Utley pulled a ground ball to the second baseman Robinson Cano who turned the 4-6-3 double play, even though replays showed Utley was safe at first.
Martinez took the loss. Martinez was charged with 3 earned runs in 6+ innings pitched, while striking out 8 and walking 2. When he was relieved in the 7th inning, he smiled at the New York crowd as he exited the field, possibly the only reaction an almost always jovial Pedro could display for the tenacious and hearty rivals that Yankees fans have become over his career.
Final score...Yankees 3, Phillies 1. The series, now tied 1-1, will move to Philadelphia for three games, Saturday, Sunday and Monday. 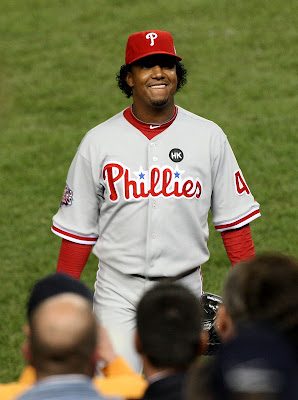 ---------------------------------
If you're new here, be sure to check out loads of exclusive PhoulBallz interviews by clicking HERE. This season, PhoulBallz has had dozens of great Q&A sessions with people all up and down the Phillies' organization. Major Leaguers like Greg Dobbs, JC Romero, Pedro Martinez and Brett Myers...minor league coaches like Dusty Wathan and Bob Milacki...big name prospects like Kyle Drabek, Domonic Brown and Michael Taylor...lesser know future stars like Justin De Fratus, Travis D'Arnaud, Trevor May and Mike Stutes...and loads more. Click the link and check them all out.