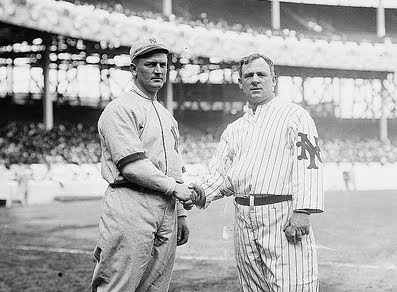 Harry Wolverton was a third baseman for the Phillies from 1900-1904. Never an exceptional offensive player, Wolverton's accurate throwing arm and slick fielding earned him a starting spot with the Phillies after 2 years as a part time player with the Cubs.

Wolverton's best season in Philadelphia came in 1903 when he batted .308 with 13 doubles and 12 triples in 123 games. The following season, the Phillies lost 100 games and ownership decided to overhaul the squad. Wolverton was deemed to be expendable and was traded to the Boston Beaneaters during the 1904-1905 offseason.

After the 1905 season with Boston, Wolverton took to managing in the minors, winning titles in 2 of his first 3 seasons as a skipper. He managed in Newark and Oakland before being named manager of the New York Highlanders, who would later become known as the Yankees. He took over a ballclub that had gone 76-76 and finished in 6th place.

Wolverton used himself as a part time player in 1912 with NY, but his reign as manager was a short one. At age 38, Harry batted .300 in 34 games, but it didn't help the team much as their final record was 50-102. To this day, the New York American League franchise has never finished with a worse record. Based on the weak performance by the team, Wolverton was let go.
Wolverton would return to manage in the minors and spent the next four seasons managing Sacramento and San Francisco, before retiring.
-------------------------
Check out PhoulBallz.com on Twitter HERE!

Anonymous said…
can you believe a girl is reading about sports. lol :) i can't help it i love it!