By Jay Floyd
Jay Floyd’s grandfather drove the Phillies’ bus for regional road trips during the 1960’s. Since those days, baseball was in the family.

In the past decade, Jay has spent time as a coach to teenage players, as a minor league reporter and as a weekly radio analyst during the professional baseball season.

This web site, PhoulBallz.com, served as a launching pad for Jay to start writing about the great sport and the site’s affiliation with the Townsquare Media group’s Shore Sports Network allowed Jay to cover local minor league clubs, like the Lakewood BlueClaws, from the inside.

Jay is a published writer and photographer in a freelance capacity and he spent more than six years with PhilliesNation.com as a minor league contributor.  As PhilliesNation grew and debuted its weekly television program in 2012, Jay was also regularly featured as a correspondent and panelist on the show. 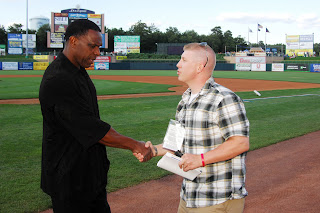 Additionally, Jay co-hosted a successful internet radio show, known as The PhoulBallz Minor League Podcast, along with Tug Haines.  That show, which featured live call-in interviews and in-studio guests would garner thousands of weekly downloads during its time in production.

During his time covering baseball, Jay has interviewed various players, coaches and team personnel from the minor leagues to the Majors, including All-Stars, Cy Young Award winners, team executives as well as Hall of Famers.

By Jay Floyd
Season's greetings to all of you! It's that time of the year to celebrate and enjoy the holiday season. Every year at Christmas time, I survey a group of Phillies prospects about what they get excited for during the holidays.  This year, we focus on just one up and coming player, corner infielder DJ Stewart. The 22-year-old righty batter had a solid season in 2021. In 94 games combined with Class A Clearwater and Class A Advanced Jersey Shore, Stewart notched a .265 batting average with 14 home runs, 42 RBI and five stolen bases.  Recently, I talked with DJ to gain his feedback on all of his holiday favorites. Read ahead for that interview... -What's your favorite Christmas movie? My favorite is This Christmas.  My Mother and I would watch it together every Christmas, so it just stuck with me. -What is your favorite Christmas song and which version is best? This Christmas by Chris Brown.  It's the final song of my favorite Christmas movie. -What's your favorit
Post a Comment
Read more

By Jay Floyd
Season's greetings to all!  It's that time of the year to celebrate and enjoy the holiday season.  Every year at Christmas time, I survey a group of Phillies prospects about what they get excited for during the holidays.  This year I included a throwback Phils name as well. Individuals taking part in this year's 11th annual Christmas favorites survey include former Phillies All-Star and coach Mickey Morandini as well as pitching prospects Dominic Pipkin , Erik Miller and Ben Brown along with corner infielder Matt Kroon. Inquiries and responses regarding each player's holly jolly favorites lie ahead...   -What's your favorite Christmas song and which version? Morandini- All I Want For Christmas by Mariah Carey. Pipkin- Blue Christmas by Elvis.  It's just unbeatable.   Miller- I don't like Christmas music, to be honest. Kroon- I am a big fan of the original Jingle Bells. It reminds me of being a kid again. It reminds me of all the holiday act
Post a Comment
Read more

By Jay Floyd
Jesse Biddle, image- Jay Floyd After a miserable stretch of starts in June, lefty pitcher Jesse Biddle was placed on Double-A Reading's temporary inactive list. On Saturday, he'll make his long awaited return to the FirstEnergy Stadium mound when he starts the first game of the Fightins' scheduled double header against Binghamton. The 22-year-old posted a 0-4 record with a 12.64 ERA in four June starts. It was clear that there was something quite wrong with Biddle, who had missed a start in late May after being pelted with hail and suffering a concussion. A mixture of feelings including confusion and anger were firmly settling in while Biddle's efforts on the mound were not. The Phils saw a need for the Philadelphia native and Germantown Friends School product to take a break. Exams discovered lasting impact on Biddle stemming from the concussion and time off was required. "For me it was an important time not only to take a mental break and to go down
Post a Comment
Read more