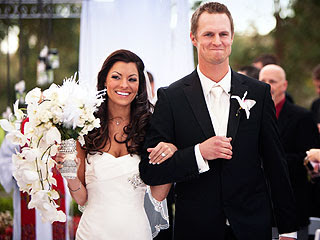 On Saturday, Phillies pitcher Kyle Kendrick married 3-time Survivor contestant and former Flyers employee Stephenie LaGrossa. The couple exchanged vows in front of 105 guests at the Silverado Resort in Napa, California.
Their special day featured many personalized aspects, including cocktail hour snacks modeled in the fashion of mini Philly cheesesteaks, as well as the couple's two dogs, Bebe and Champ, serving as flower girl and ring bearer during the ceremony. The pets wore a white dress and a tuxedo, respectively.
Kendrick is now the second Phillies pitcher to marry a former contestant of the CBS reality competition program, as lefty Cole Hamels wedded Heidi Strobel, who appeared on the sixth season of Survivor, in 2007. 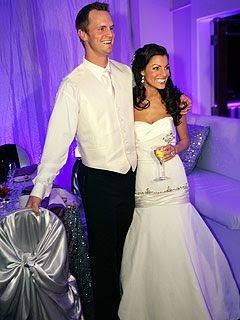 By Jay Floyd July 08, 2020
Logan O'Hoppe, image- Jay Floyd Please consider supporting my work and via my Patreon page .  For a small monthly fee, your patronage will get you exclusive interviews and other prospect related material as well as early access to all of my other content such as this feature.  Thank you.   On Friday, the Phillies added a pair of catchers to their 2020 player pool.  Minor leaguers Logan O'Hoppe (pronounced Oh-HOP-ee) and Henri Lartigue arrived in Philadelphia to help catch bullpen sessions for the team's collection of approximately 30 pitchers. The call to O'Hoppe was extremely welcome as the 20-year-old had been staying as active as he possibly could, working out with other players that have been been waiting out quarantine due to the current pandemic at his home on Long Island.  However, he had been very eager to step back onto an actual baseball field. "I just hope I can play soon.  Where ever that is or whatever form that is, that'd be awesom
1 comment
Read more