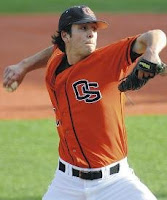 Mike Stutes completes "The Reading Phils Mike Tri-fecta" over three days, here on PhoulBallz.com. Stutes, a 22 year old, was an 11th round selection by the Phillies in the 2008 amateur draft. Stutes, a right handed starting pitcher, helped lead Oregon State to the College World Series championship in both 2006 and 2007. Stutes and teammate Vance Worley are the first players to begin a season at Reading the year after being drafted since Pat Burrell did it in 1999. Stutes was the Phils' minor league pitcher of the month in August '08, when he went 4-1 with a 1.72 ERA in 6 starts. Check out my Q&A with the third Mike below.

Can I get you to talk about the coaching staff and how they help you deal with ups and downs?
They've been real positive with me. I started out good and then I hit a rough patch. They've stuck with me through it all. I haven't heard any negative words from them. Every day they try to come out, work with me, try to get me turned around back in the right direction. Hopefully, I'll get right back to where I was.

NBA, NHL and MLB drafts all just passed. What was your draft day experience like last year?
I was sitting in my house at school and was with the four other guys I lived with. It was early in the morning, 'cause I got picked on the second day...it was like 9:30, 9:45 in the morning, and there was another guy I lived with that was hoping to get drafted (also), so we were all sitting around just watching the draft, watching some guys from our team go. It was pretty exciting. I got drafted the year before (and didn't sign), it was the same type of thing. I kind of knew what to expect a little more. I was disappointed with where I (was chosen), but at the same time I was excited to get a chance to pitch for this great organization. That's really all you can ask for, is to be put in a good situation. I felt pretty lucky to get drafted by the Phillies.

Winning the College World Series twice must have been huge for you.
It was awesome. That's the reason I went to college for baseball. That was always my goal, growing up. I always watched on TV and thought, "That's the biggest stage. That's the most fun." You're on SportsCenter every night. It's the closest thing to being in the big leagues without actually being there. I feel really fortunate to have gone through twice and hopefully it helps me out in the long run.

Have you considered being a good luck charm for three straight World Series wins (two in college, one for the ML parent club)?
(Laughs) I know I didn't have anything to do with the Phillies' one, but, I don't know. Maybe I am. So it'll keep me around.

Is there any specific advice you might give to teenagers who hope to play baseball beyond high school?
Learn how to handle a failure. If you get a hit 3 out of 10 times, you're doing a great job. A lot of guys struggle with going 0-for-3, 0-for-4, and really get down on themselves. Or pitchers...I just had a bad stretch, where I went through a couple outings where I thought I threw the ball well, but things weren't going my way. You know, that happens. That's part of the game. Once you understand that, you're going to be a lot better off. It took me a long time to learn that I get really down on myself after getting beat and that's something you have to keep on an even keel. It's a long season, you gotta try to ride it out.

Who was your favorite pitcher growing up?
I had two. I watched Greg Maddux and Pedro Martinez all the time.

Was there anything with those guys that you might try to model yourself after?
I liked watching Pedro pitch, because he went right after guys. He said, "Here's my fastball, go hit it. Here's my change up, go hit it. I'm gonna throw what I want to throw and I don't care who you are. I don't care what the situation is." And that was kind of how I was growing up. It was cool to watch a guy go out there, and he was the best in baseball for a while. He was a guy I tried to model things after, when I was growing up.

What is your favorite Michael Jackson song?
I'll have to go with Thriller, just 'cause of the video.

Unknown said…
My boyfriend is a huge mike stutes fan we watched him with the reading phillies and the Lehigh Iron Pigs. Is there a page of memorabilia that fans can buy from for gifts
November 5, 2010 at 5:02 PM

Your best bet will be to stay up on that sort of info via the Reading & Lehigh web sites. You could also email the teams for info on such events.
November 6, 2010 at 12:49 PM

cita84 said…
Hey Sonya I would love to talk to your bf. I grew up with Mike in Oregon and am planning in coming out to Philly to watch him pitch this year..if he gets called up which I'm hoping he does. Good interview with Mike, I know its a bit old but thanks for taking the time to do it. I gotta give it up when someone reps a local boy like Mike. Best of luck.
January 4, 2011 at 3:02 PM