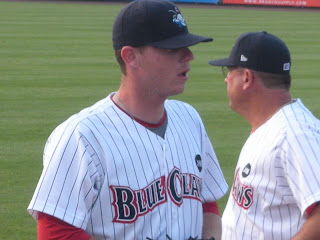 Justin De Fratus is a 21 year old right handed relief pitcher with the Lakewood BlueClaws. An 11th round draft choice in 2007, Justin had been a starter in his first two seasons in the Phillies organization. Informed this spring that he'd be switched from the rotation to the bullpen, Justin has excelled and become one of the most reliable pitchers on the Lakewood staff. In 19 games this season, Justin is 2-0, with a 1.83 ERA and 0.89 WHIP over 39 1/3 innings pitched. PhoulBallz.com spoke with Justin De Fratus just last night. Here's how that went down...


Justin, South Atlantic League all star selections were announced this week, and you were named to the team. Can I get your reaction to that? How excited were you?

Very excited about it. Well, especially this year because I just got moved to the bullpen, so this is a new role for me. So, if anything, it's reassuring that I'm doing my job. It's the first time in my pro career that I've been selected as an all star, and I'm really honored. To be considered among the best in this league is awesome.


What's it like being able to share the honor with 5 teammates (Travis D'Arnaud, Harold Garcia, Tyler Cloyd, Anthony Gose and BJ Rosenberg all made the team as well), your manager (Dusty Wathan) and a coach (Tim Gradoville)?

That's awesome. That just shows that we're playing well. We're in first place. There are even a couple (additional) guys that should have been selected that weren't, like Jim Murphy...having a great year. Our whole team is doing great.


I wanted to ask you about changing roles...going from starter to reliever. Is there a preference, or do you miss starting?

I do miss starting and I do miss it a lot. But, I love the new role. It's hard not to like something if you're having success. And as far as just changing it up, I think this suits me a little bit better. Me, when I was starting, ya know, you warm up a half hour before the game. A lot of times, I'm ready to go and I've still got 10-15 minutes left before the game's ever started, because I just warm up very quick. There are still some things I'm getting used to, as far as the daily routine and all that, but I think I'm doing a pretty good job of it to help me stay focused in the games.


How often have you gone on back to back days, and what's the change in schedule like for you?


Are you familiar with your own strike out to walk ratio (41 strike outs, just 3 walks this season!)?

I know what it is.


What's the biggest contributing factor to having such a huge variance in your strike outs versus your walks surrendered?

I've answered this question before, because I've always had a pretty decent strike out to walk ratio, and it was definitely my dad (Terry). He's the reason why I throw so many strikes, 'cause he impressed it on me at a young age- throw strikes, throw strikes, throw strikes. So it's kind of something that stuck with me. You know, as a little kid I didn't just go up there and throw the ball. I threw it with a purpose- throw the ball over the plate. And now, when I got into pro ball, it was easier for me to manage the plate, whether to go outside or inside...instead of just trying to find the strike zone, I was already able to throw the ball over the plate.


The Phillies organization is big into Lou Gehrig's disease/ALS as charity. The BlueClaws had a celebrity waiter event a week or two back to help raise money for the cause. Talk about what it was like to help with such a great cause.

That was cool. It's always good to do something like that. I don't personally know anybody or been familiar with anyone who has been effected by Lou Gehrig's disease, but just knowing that all that money went to a disease that we're trying to get rid of is good.


How big of a help is coach Bob Milacki toward your success this year and what else are you working on?

He's had a tremendous role in what I've done...adjusting to the bullpen and keeping me confident. Throughout spring training when I was told I was going to the bullpen, I didn't know what to expect, but he said, just reassuring me- you're gonna do well, you're gonna do well. And then every day I'm out there doing side work with him. We've been working on (improving) my slider. And getting it more consistent and harder, getting it to look like a fast ball out of my hand, and getting to become more of a strike out pitcher, so I can become a little more dominant. Because, being around the (strike) zone a lot, last year I was giving up a lot of hits. And that's something that comes with being around the zone, but we're trying to minimize the amount of hits. I'm trying to be effective in the zone, so that's why we're trying to make my slider a little bit better, to not only make that better, but to help my fastball.


What are your favorite TV shows?

I like Cash Cab and Aqua Teen Hunger Force.


If you could face any batter at any level, who would it be? Do you have a dream opponent?

Actually, JT Snow was my favorite player growing up, so it would be cool to face him. Angels were my favorite team.


And lastly, what ballpark would you most like to pitch in one day?

Thanks for sharing this link - but unfortunately it seems to be down? Does anybody here at misterballz.blogspot.com have a mirror or another source?

This is a inquiry for the webmaster/admin here at misterballz.blogspot.com.

Can I use part of the information from this blog post above if I give a backlink back to your website?

Jay Floyd said…
If that is a legit comment and you wish to sample something while giving a link or credit to this site, go right ahead.
February 27, 2011 at 2:04 PM