By Jay Floyd January 15, 2009
This week I heard old news about how when the Indianapolis Colts won the Super Bowl, they gave former Colt Edgerrin James a championship ring. "Edge" had been a Colt for seven years, and even though he was gone when they won the big one, the team and the coaching staff felt as though James had contributed in building the team that won it all, so they awarded him a ring.

me wondering which people, in an extended Phillies phamily, would be deserving of a 2008 World Series Champions ring. I heard an interview with Mike Schmidt, in the days that followed the Series, and when asked if he thought he'd get a ring, he said, "They have my (ring) size." Schmidt, the Hall of Fame thirdbaseman, was a long time Phillie, a one time coach of the single-A Clearwater Threshers (where he managed World Series MVP Cole Hamels) and appears as a guest hitting instructor in Phillies spring training every year. With all those things in mind, of course Mike Schmidt should get a ring.
In my opinion, the Phillie Phanatic should strut around Citizens Bank Park with some shine on his furry green paw/claw/hand in 2009. I'd even consider his momma, Phoebe, who makes many appearances for the Phillies each season. The Phanatic is as much of a Phillie as the guys who wear the uniform with pants. 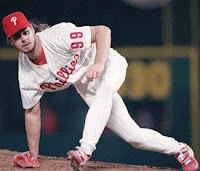 How about this suggestion? Mitch Williams! Mitchie Poo, a post game analyst for the Phils during the 2008 season, was best known for surrendering the biggest homerun of the past few decades, when Joe Carter "walked off" in the 1993 World Series. Phans at the game five 2008 World Series clincher created a banner that stated, "Mitch, you're off the hook." What better way to prove to Mitch, who received death threats after the Phillies 1993 loss to the Blue Jays, that he is truly no longer held accountable, than to give him a World Series ring?

What about 94-year-old phan Jesse Branson, who was featured throughout the Phillies video yearbook, The Perfect Season? Branson, a virtual encyclopedia of baseball information, met several players and manager Charlie Manuel early in the 2008 season, and correctly predicted to all of them that the Phillies would win the World Series. Boosts in confidence were surely provided, and perhaps a debt is owed to Mr. Branson. A payment of gold and diamonds that fits on his ring finger might work.

Naturally, the broadcasters would all get a ring. Scott Franzke, Tom McCarthy, Larry Andersen and Hall of Famer Harry Kalas will all be in line to be jeweled up. Even 1983 NLCS MVP Gary "Sarge" Matthews will get a WS ring...but what about the Sarge's hat provider? Sarge's extensive selection of hats was surely an inspiration to Phillies team members who can only aspire to achieve great things in their playing days, so that they, too, can collect such a variety of head covers some day. From fedoras to yamulkas, Sarge has the head accessories covered. The only thing missing is a 2008 World Series ring. So, why not take care of Sarge's head wear hook up also?
Should the little William Penn statue above the Comcast Building get a ring? Probably not, but the people in charge of Comcast who had the idea to attempt to break The Curse of William Penn, deserve them. Let's make sure Comcast CEO Brian Roberts and Comcast executive vice president David Cohen, who are both Phillies phans, get rings. Or should it be the iron workers who actually attached the new little Willy? Dan Ginion and John Joyce, you deserve ring consideration as well.
For those of you who may not be familiar with the curse, here you go. Philadelphia City Hall is adorned with a statue of William Penn, a founding father of 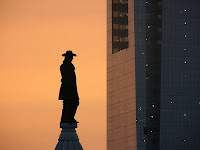 Pennsylvania. For many decades, there was a gentleman's agreement that stated the Philadelphia Art Commission would approve no building in the city which would rise higher than this statue. The agreement ended in 1987, and was followed by a long drought of championships for the four major sports teams in the city. Many people began to blame the slap in the face to Penn as reason for the futility of the sports franchises. In 2007, Comcast erected what would become the new highest building in the city, and in an effort to end the curse a small statue of William Penn was attached to a beam at the top of the building.
If the Phillies were to go the route of the Colts and present a ring to a player who was on the team the previous season, and was widely felt to have contributed enough to the team who actually won the championship, it would absolutely be ALL of the following: JD Durbin, Wes Helms, Abraham Nunez, Jon Lieber, Geoff Geary, Freddy Garcia, Jose Mesa and Francisco Rosario. Thanks to all of you for getting the hell out of the way so that the Phillies could phreakin' win! Here are your rings. Now continue to stay away.

Jay Floyd said…
Shout out to my lady, Mrs. Ballz, for assisting with my brain storming session for this post.
January 16, 2009 at 1:46 AM

GM-Carson said…
Good lady you got there Ballz.

IRONPIGPEN said…
Do Tracy and Cervenak get rings for going to Phillies spring training complex during playoffs as emergency stan-bys?
January 16, 2009 at 6:53 PM

Amanda said…
I think they do since they made apperances at the major league level. I think anybody who was on the roster gets a ring.
January 17, 2009 at 1:00 PM