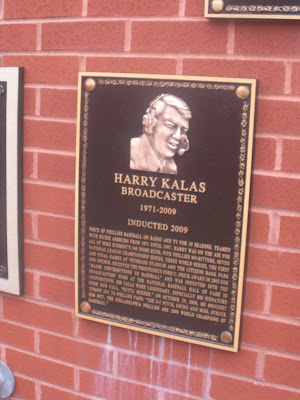 At the ballpark today for the first time since Harry Kalas was inducted into the Phillies Wall of Fame on Friday, I noticed an error in the text on his plaque. Verbage on the plaque reads like this...

Voice of Phillies baseball on radio and TV for 39 seasons. Teamed with Richie Ashburn from 1971 until 1997. Harry was on the air for all of Mike Schmidt's 548 home runs, five Phillies no-hitters, seven National League Championship Series, three World Series, the first and final games at Veterans Stadium and the Citizens Bank Park 2004 opener. Received the prestigious Ford C. Frick Award in 2002 for "Major Contributions to Baseball" and was inducted into the broadcasters' wing at the National Baseball Hall of Fame in Cooperstown. His calls were legendary, especially his signature home run call, "Outta heeere." On October 29, 2008, he brought utmost joy to Phillies fans: "The 0-2 pitch, swing and miss, struck him out. The Philadelphia Phillies are 2008 World Champions of Baseball."


The phrase, "Swing and a miss" is missing the word "a". It's certainly a minor error, but Harry deserves better than this. If they wish to immortalize a man along with his, and the team's, shining moment, it must be accurate. The Phillies need to fix this error before the team returns home next week.

*Update 8/19/09- I was at the ball park last night, upon the Phillies' return from a road trip, and took a look to see if the team had fixed the error. They have not. I inquired with an Ashburn Alley staffer and he claimed he was not aware of the issue. I've sent e-mails to the team, and I am still waiting for a response.

Harry deserves better. Phans, pass this on and get the word out, so that the Phillies fix the mistake.

** Second update. I got a reply from VP of Alumni Relations and long time Phillies front office guy, Larry Shenk this afternoon. Shenk takes responsibility for the error.

I am the one responsible for the copy. Others proof-read it and no one caught
the omission. Same for when we saw the final proof on June 3. That said, I take
full responsibility.

Harry was a very close personal friend and I feel
terrible about this. I am very sorry.

Mr. Shenk was not aware of the omission prior to me reaching out to him. He assures me the team will consider correcting the misprint, but it would be a process that may take a while.

Anonymous said…
I seldom leave comments on blog, but I have been to this post which was recommend by my friend, lots of valuable details, thanks again.
February 3, 2011 at 5:47 PM