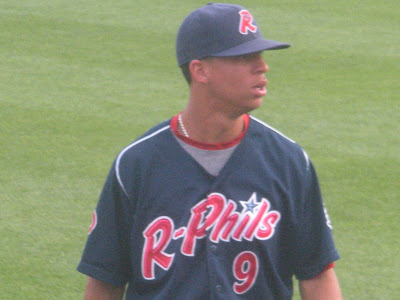 Quintin Berry is a 24 year old outfield prospect in the Phillies organization. Currently playing for the double A Reading Phillies, Berry was selected as an Eastern League all star this year and leads the EL in steals with 45. Berry, a 5th round selection in the 2006 draft, is hitting .278 with 4 homers, 22 RBI and 75 runs scored through 115 games with Reading thus far in 2009. I had the opportunity to speak with Quintin recently, and here is how that went down.


Quintin, can I get you to speak a bit about your success so far this season?

It hasn't all been success. I had some slow starts, and some ups and downs, but I'm happy with where I'm at, but I'm not content. Ya know, I'm gonna keep on trying and finish strong and try to move on up.


What was the all star experience like for you?

It was pretty fun. The game itself was a lot of fun. You get to get around here and hang out with the guys, and just kind of relax and have fun. Every game that we play during the season can be kind of serious, but (with the all star game) you get to relax and get to know each other a little bit better. Playing those guys you get to build a relationship. But, it was a good experience.


How about that TV commercial shoot for the Reading Phillies? What was that like?

It was fun. Uh, funny. I was mad- we put a lot more time into it than just that little 15 seconds of fame we had. But it was a good time. Me and my roommate Mike (Taylor), they asked us to do it and I'm glad we did it. I get to hold onto that (video) to show my kids some day.


What do you think your ceiling is, as a player?

I don't know. My job is to just get on base and get in scoring position for the rest of my teammates and make it easier for them...take a lot of pressure off the team. And that's what I'm trying to do, so I'll just keep trying to get on base and do what I can for them, and hopefully the organization likes what I'm doing and that'll help move me along.


How has the coaching staff with Reading helped you this season?

They're always in your ear. Whether you're doing well, or you're doing bad. They don't want you to be comfortable or relaxed in what you're doing. They always want you to get better, so they stay on top of you pretty hard here. Usually, at the double A level, or triple A level, coaches will just let you play. They're still trying to teach here, and that works for us and we're doing well. Can't be mad at 'em.


What would you say your strengths are as a player?

My strengths? Speed, defense and the ability to move the ball around and play a short game. Short game's my game and that's my strength. I just try to use that and use my speed and anything else to help on the base paths and help in the outfield, playing defense.


What ball park would you most like to play in some day?

Petco Park- my home town, San Diego. I'd love to go down town San Diego and play down there and play in a big stadium and enjoy 75 degree weather with no humidity.

Oh, hey, I mean for sure! I'd love to play in Citizens Bank Park. That's my number one goal right there!

I'd have to say A League of Their Own. I love that movie. Rosie O'Donnell. It's hilarious.


How many mascots does Reading have and why are there so many?