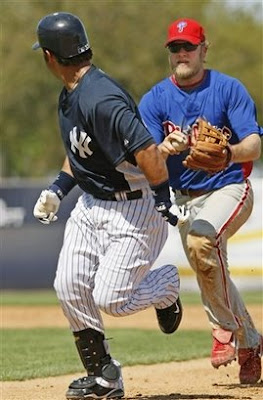 Everyone's least favorite Phillie is back at it again. This time the "I've got a sweet beard, so who cares about hitting?" ball player looks even worse after Marlins pitcher Josh Johnson hit his third homerun of the season on Tuesday.

In fact, I counted at least a dozen starting ML pitchers who currently have a higher OPS than Eric Bruntlett, this year. The Phillies have to possess at least one minor leaguer who could back up the infield positions and hit for a batting average higher than .133. If nothing is done, it would be as if the team is not trying.

Congratulations go out to Anthony Gose who set the Lakewood BlueClaws single season stolen base record on Tuesday night by stealing his 59th and 60th bases of the season. The previous record was 59, set by Chris Roberson in 2003. Gose is 60-for-77 in stolen base attempts (78%) this season. Gose's 60 steals leads all of minor league ball this season.

Phillies pitchers rehab updates- Chad Durbin to start for Clearwater tonight, while Pedro Martinez starts for Reading. Brett Myers is set to throw a simulated game in Clearwater on Thursday. JC Romero is slated to pitch for Clearwater on Friday.

Contrasting minors- Phillies short season rookie ball team the Williamsport CrossCutters won their game 20-4 over the Staten Island Yankees on Tuesday, in a game highlighted by Carl Uhl's 3 triples. The CrossCutters were up 20-0 after 5 innings. The Reading Phillies lost 10-0 on Tuesday and managed to get just 1 hit in their game against the Trenton Thunder.

It's PhoulBallz Phillies Wednesday on The Shore Sports Report. The show is on each day from 3-6pm, so check it out. I'll be on today around 3:30. Link here!

GM-Carson said…
I was thinking the same thing about Brunt/Johnson this morning while reading the boxscores.

Jay Floyd said…
Thanks Carson. I must have glanced at the wrong thing, when I was typing that.

Bruntlett makes me angry. Seriously, your boy Sellers, Cairo or Ozuna would be outperforming this guy. Donald could have too, probably. And I know Coste played infield in his minor league career, and they let him go. I'd rather have them bring back the Pie Guy Tomas Perez than keep Bruntlett around.
August 5, 2009 at 11:34 AM