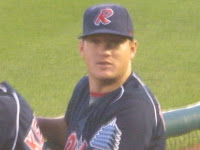 Brad Harman is the starting second baseman for the double A Reading Phillies. The 23 year old Australian was signed as an amateur free agent in 2003. He is currently batting .202 with 5 homers and 39 RBI this season. Harman was up with the big league Phillies last season, filling a roster spot while Jimmy Rollins was on the disabled list. Harman appeared in 6 games for the World Champion Phillies in 2008. I had a chance to speak with Brad recently. Here's how that went down.


Can I get some comments from you about your season thus far?

Probably very disappointing the way things have panned out. I just keep trying to work hard and get better each day, and that's all I can do.


What aspects of your game are working to improve?

It's more an offensive thing, I think, just very inconsistent. The way things can go well for a couple weeks, then die off, as long as I have. So, just consistent hitting, consistent approach, plan and just all around consistency with the offense.


How was your time representing Australia in the World Baseball Classic?

It was a huge honor. Any time I get to strap on the Australian uniform it's a pretty big deal and I'm proud to wear that uniform. It was an awesome experience playing against the guys we did in Mexico. Great crowds...great competition. Ya know, it was just fun to play at that level and play like a big leaguer plays every day for the 4 or 5 days we were there. Awesome experience and I wish I can play in some more. We had a great group of guys. Quite a few guys now made it up to the big leagues.


Your time with the Major League Phillies last season...what was that like for you?

It was a dream come true, an awesome experience. Something that you strive for...everyone in this locker room and everyone in minor league baseball and beyond that. Ya know, everyone wants to play in the big leagues so it was a dream come true and obviously a great experience to be around those guys as they went about their business on a daily basis. The work ethic they have up there and the way they do things was just phenomenal and was fun to watch and be a part of while I was there.


Are you very thirsty to get back there?

Absolutely. As I was just saying how great it is, that's where you want to be. I'm disappointed with the way things have been going, but still working hard to turn things around. Just trying to work hard and hopefully end up there again one day.


Who has been the toughest pitcher you've faced at any level?

Well, when I was up last year in the big leagues, I was pretty lucky 'cause I had 10 AB's and I faced Randy Johnson, Brandon Webb, Tim Lincecum and Manny Corpas...was my first at bat, closing pretty well for the Rockies at the time. So, those four guys right there. In my 10 AB's I got to have pinch hits and a start against Randy Johnson, so it was tough. Yeah, it wasn't an easy run out there with those guys. If I have to pick ONE of them- Brandon Webb.


What is your best sport besides baseball?

Maybe cricket, back home. Australian cricket. It's tough, you don't even have gloves or anything. But to be honest, baseball takes up most of my sporting time, so I don't really have a chance to play anything else.


What was your experience like watching the Phillies' World Series run last year?

I was just with friends at home in Australia. They were coming over to my place to watch the games on a daily basis. It was cool. One of my friends, Mitch, played in the minor leagues with the Dodgers, so we were watching the (NLCS) and both going for our teams, which was pretty cool. It was fun.


What do you see as some pluses within the Phillies organization?

The work ethic and the approach you need to bring to the field every day is demanded of you, but it's also what you need to do to succeed. I think that's one of the big (reasons) why the Phillies have succeeded so well up in the big leagues at the moment. A lot of guys come through this organization. It's a hard working organization, but that's what it takes to be a champion.

I like a lot of baseball movies. I'm gonna have to say Bull Durham. It's a classic baseball movie about the minor leagues and sticking with it and the life that it leads. It's pretty similar...obviously, a bit better nowadays, but probably the most realistic and it's the closest to how it is.


What player from the past would you most like to see play in person?

I always loved to watch Ozzie Smith. Back home, there'd be a baseball game on, once in a blue moon on TV and Ozzie Smith was a guy I loved to watch play defensively. When I grew up, I was always a defensive sort of guy. Real little, so I didn't have much power with the bat. He's one guy that I loved watching play the game.

Today is PhoulBallz Phillies Wednesday on Fox Sports 1310 am's Shore Sports Report. The show is on each weekday from 3-6pm. I will be on today around 3:30. Please check it out by clicking here.