By Jay Floyd August 28, 2009
In order to calm some folks down after a losing series and 2 blown saves in Pittsburgh, let's take a look back in time. Exactly 10 years ago today, the Phillies visited Colorado for a double header and began a stretch where they would lose 18 of their next 19 games. Prior to the slump, the Phillies had a 67-59 record. By the end of it, they were 68-77.

The bump in the road that was the Pirates this week isn't so bad. We all knew the back end of the bullpen was a problem. It's not something to be okay with, but there is still time to try some alternatives. If that outlook doesn't improve your mood, let me show you that pitiful Phillies starting lineup for game 1 of a decade ago. 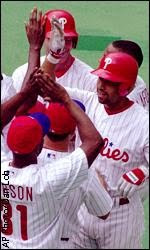 
Kevin Jordan was the clean up hitter.

Game 2's line up was worse. Switch in Kevin Sefcik for Glanville, Mike Lieberthal for Bennett, Alex Arias for Cedeno and Dave Doster for Anderson. Except for one guy, none of those players, in either lineup, was a star. Lieberthal had some good seasons and was a multi time all star, but Abreu is the only elite player among the men in those lineups. By comparison, top to bottom, the 2009 Phillies lineup has many players who could be described, minimally, as great. Two League MVP's, five 2009 all stars, and a full list of guys headed to the playoffs.

The starting rotations, of then and now, are polar opposites as well. Your starting five, 10 years ago, were Robert Person, a rookie Randy Wolf, Mike Grace, Paul Byrd and Ogea. Randy Wolf developed into a borderline one time all star, but none of those five were ever considered great in MLB. On the other hand, our 2009 Phillies starting rotation has a World Series MVP, a rookie of the year candidate and two former AL Cy Young Award winners. The 2009 rotation is so good that a 250-win guy got demoted out of the rotation. Jamie Moyer would have been the ace of that 1999 squad!

In conclusion, phans...if Brad Lidge, Ryan Madson, the offense's recent struggles to hit with runners in scoring position, Matt Stairs' slump and two Pirate wins have you down...consider this: IT AIN'T 1999!