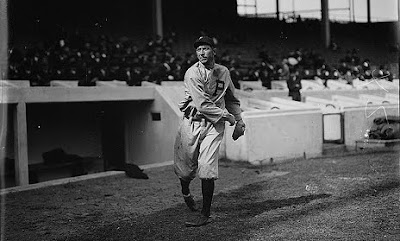 Tom Seaton was a starting pitcher with the Phillies from 1912-1913. He joined the Phillies after winning 26 games for Portland in the Pacific Coast League. In his rookie campaign, he used his overpowering fastball to win 16 games and hurl 255 innings.

Seaton got off to a very hot start in 1913 when he was undefeated in his first 12 starts. That season, he threw 5 shutouts, and led the National League in wins (27), strikeouts (168) and innings pitched (322 1/3). He did all that with a 2.60 ERA. Most importantly, Seaton was undefeated against the NL Champion, powerhouse NY Giants who was 101 games that season.

All that success had Seaton believing he was in line for quite a pay raise the following season. When the Phillies' front office only offered Seaton a $3,500/year salary, he went looking elsewhere for employment. The newly formed Federal League was offering up big contracts to the league's best players. Seaton obtained a 3-year deal worth $8,000 a season from the Federal League's Brooklyn franchise, making him one of the highest paid players in the new league. He also managed to get some special perks in his deal like the team picking up his wife's road expenses so that she could travel with him and a separate sitting area on the team's train coach.

Seaton delivered another fine season in 1914, with his new squad, winning 25 games and pitching 7 shutouts. Seaton would play two years in the Federal League, until the league folded. The following year, Seaton played for the Cubs. By 1918, he was back in the minors, but in 1920, he was banned from baseball for suspicion of gambling.

Jay Floyd said…
Hmm, maybe not. Seaton was a guy who was out for money and he ended up getting banned from baseball, because he was affiliated with the "Black Sox" scandal offenders. If Seaton was around in 1915, the World Series gambling mishap could have occured sooner and in Philadelphia.
August 17, 2009 at 10:24 AM