More on Pedro and Lakewood 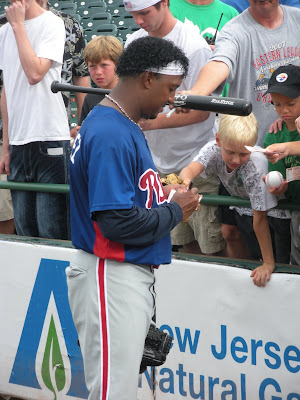 Pedro Martinez's visit to Lakewood on Sunday was a big deal for all involved. Pedro is looking forward to getting himself ready to pitch in the Majors. Phans are anticipating the Phillies adding another Cy Young Award winner to the pitching staff. The Phillies are hoping that Martinez can contribute and help the Phillies in the pennant chase. The home team BlueClaws tried to play host to the Phillies' pitcher, additional media and an early arriving crowd. I spoke with a couple key BlueClaws in Sunday's happenings, who also thought it was a big deal, catcher Kyle Lafrenz and pitching coach Bob Milacki. Lafrenz was a 2009 draft pick and is the first '09 draft choice to make it to the Class A level BlueClaws. Milacki is a former Major League pitcher and an experienced coach.


I asked Kyle about his experience in the roughly 25 minutes he spent warming up with and catching Pedro...

You can't beat it. I mean, he's a future Hall of Famer, in my words. But, his stuff's just as dirty as it looks on TV and he's just as good as he looks on TV, if not- better. He's got the experience as a big leaguer and he can teach us.


Did you learn anything today?

Yeah, I learned that it takes some skill to pitch up there and he's got it.


Does this have potential to be a highlight for your career?

Yes. This is once in a lifetime...just catching Pedro Martinez. Not too many catchers get to say that.

Coach Bob was asked about his own take on Pedro's work out...
I just watched and counted his pitches. It was just fun to watch. When you get older players, that have done it as long as he has, it's almost like riding a bike for them. It's so easy to watch. If you noticed, he never even bounced the balls. His delivery's good. It's fun to watch.

Milacki was asked if he learned anything from Martinez that he could pass on to his own Lakewood pitching staff...
Not really, 'cause I pretty much know everything. (Laughs) I think the best thing is, we had our pitchers out here throwing and they were watching him, and watching how he was working. They learn, they see what he's doing, and see that he was working more on non-strikes more than strikes. And they noticed that, and I think that's the hardest thing to teach kids at this level, is being able to throw non-strikes. And as they get better command, they're gonna have to learn how to throw non-strikes so they can throw strikes to get hitters out. 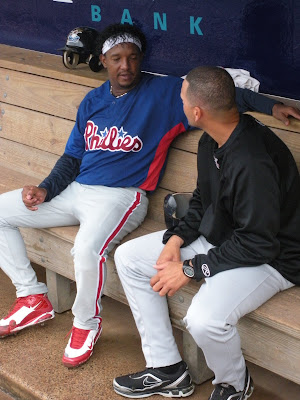 Jason Knapp, who was traded as part of the package to Cleveland that got Cliff Lee and Ben Francisco in return, has been assigned to the A level Lake County Captains. Knapp and the Captains will visit Lakewood this Tuesday for a 5 game series.

Knapp being dealt last week marked just the third time active BlueClaws were traded. The other two times were Andrew Barb in the 2006 Jamie Moyer deal and Javon Moran & Joe Wilson in the 2004 Cory Lidle deal.

www.buyingachampionship.com said…
Mas Pedro, por favor. I never get tired of reading about Pedro. This guy is getting old and he surely won't pitch like he did in the late 90's, but he still brings a certain element to the game which very few pitchers have. I love this guy.
August 3, 2009 at 11:52 AM

Jay Floyd said…
Lidle...good guy. I remember when he was first acquired, he was paired up at an autograph booth, at the Phillies phestival, with Mike Lieberthal. Many people didn't know who Lidle was and just walked right by him. He looked confused.