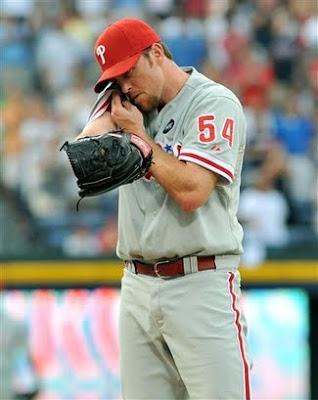 Can the Phillies win the World Series with 2009 Brad Lidge as their closer? No. As we have reviewed multiple times here on PhoulBallz, 2009 Brad Lidge is not the same pitcher who closed out games for the World Champions in 2008. That guy is gone and some look-alike has assumed his job as Phillies closer.

The highest non-Marlin ERA among the last 20 World Series winning closers is 2006 Cardinal Jason Isringhausen with 3.55. Isringhausen blew 10 saves that season, but was only scored on in 25% of his appearances. That's 20% better than 2009 Brad Lidge, who is on pace to match Izzy's 10 blown saves.

None of the last 20 World Series winning closers have gone the entire season without a win. In fact the lowest win total of the past 20 WS winning closers was 2007's Jonathan Papelbon, for the Red Sox, who had 1. All others had multiple wins.

No Phillies phan should feel confident with 2009 Brad Lidge, and his 7.21 ERA, closing games down the stretch and potentially into the postseason. As you've noticed, I've begun using the terms "2009 Brad Lidge" and "2008 Brad Lidge" to identify two men who are clearly different beings. These men wear the same jersey number, have the same birth mark on their faces and enter the playing field to the same song, but there is no mistaking that "09-BL" and "08-BL" are not the same person. How could they be...? One man was perfect and led his team through the World Series, the other man is feeble and craps the proverbial bed too often.

I'd trust a situational committee more than I'd trust "09-BL". Ryan Madson shuts down the Pirates- use him against Pittsburgh. Scott Eyre owns the D-Backs- use him against Arizona. Jamie Moyer has luck versus the Marlins- there you go. Chad Durbin is solid against the Mets- hello, New York! And when JC Romero and/or Brett Myers make it back, get those guys some turns.

This season has reached the latter portion of August. There are less than 7 weeks left before the playoffs begin. The Phillies can't keep waiting for 2008 Brad Lidge to return. It's time to bump the imposter aside and win as many games as possible.

Check out PhoulBallz.com's review of Brad Lidge's deal with the devil.

Get great stats and exclusive updates...follow PhoulBallz.com on Twitter HERE!

mvr joe said…
indeed this is a frightening outlook...if anyone spoke of )( BL whilst it was still '08, it would have been sacr-a-lidge-ous...but that lidge fell of a ledge and was replaced by a doppelganger. mebbe we should have raul start every game in the OF, then move onto the mound for the 9th, as he has a better arm then brad
August 18, 2009 at 12:10 PM

bronxbomber said…
Hate to say it, but I don't think the Phillies can repeat if they are counting on Lidge. He's too unreliable. But on the other hand, look at Isringhausen in '06. Anything is possible...
August 19, 2009 at 5:05 PM