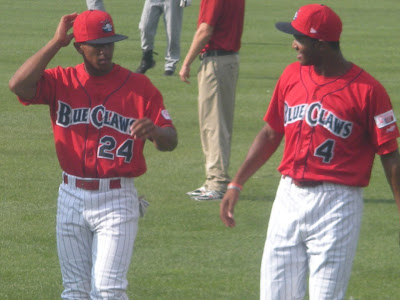 Anthony Gose, the minor league baseball steals leader, always wears his ball cap just a bit askew. A guest rehabber took issue with it, during his visit to Lakewood. I asked Anthony about that and some other things following the BlueClaws' double header Monday night. Here's how that went down.


Anthony, you were praised by Baseball America last week, with a survey they conducted of South Atlantic League managers, when they named you as best base runner, fastest base runner, best defensive outfielder and most exciting player. How do you feel about those accolades?

It feels great, actually. To have all those accolades coming from the managers, I mean, of all the players in the league, for them to recognize me as one of the top players, and to give me that high of recognition, it feels great.


Is there anyone on the BlueClaws team that you would describe as underrated?


I wanted to find out what happened with the critique you got from Brett Myers during warm ups. He took issue with your cap.

Oh, he told me, fix my hat. I kind of yelled back, "What did you say?" He said, "Don't loud talk me!" I mean, he was just trying to help me out. Teach me a lesson. He's much older, been in the game a lot longer, so he knows more than I do. I'm just a young kid, who's out there doing my own thing.


But the cap stayed crooked...

Yeah, the cap stayed crooked. That's just what I do. I'm hard headed.


So, he's trying to teach you something, and you accept it, but don't-

I mean, I understand what he's saying, but I mean I've worn my hat crooked 100-and some games thus far. So that's what I'm'a keep doing, the rest of the year.


Do you think that's something you might want to work on, as far as, accepting criticism from veterans as you move up?

I'm always willing to accept the criticism. I mean, I understand what he was doing and what he did was right. I probably should've fixed my hat, but at this point of the year, I'm'a keep wearing it how I wear it. It works for ME.

The BlueClaws had a huge night on Monday, welcoming both Brett Myers and the Phillie Phanatic to FirstEnergy Park. They also welcomed their 4 millionth fan, 7 year old Matthew Currie. Click here for more information about this milestone for the BlueClaws!

Playoff tickets are on sale for the BlueClaws also. Be sure to get your playoff tickets before it is too late. Click here to check out September playoff baseball in Lakewood.

Amanda said…
If he plays fine with his hat crooked, let it stay that way. Haha, kinda of weird Brett would say something about it.
August 26, 2009 at 12:13 AM