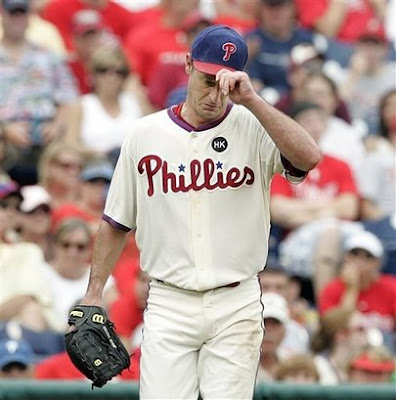 Now that Manny Parra has exceeded 100 innings pitched this year, Jamie Moyer has earned a promotion to the FOURTH worst ERA in the National League, among pitchers with over 100 innings (the other 2 who are worse- Todd Wellemeyer and Josh Greer). Moyer's 5.47 ERA overall and 6.88 ERA at home in 2009 are awful.

If Pedro Martinez makes his much anticipated Major League Phillies debut on Tuesday in Chicago, as many people expect, Moyer's next turn in the starting rotation would come around next Sunday in Atlanta. Based on his ERA and inconsistency, Moyer shouldn't get that start. As of now, the projected starters for the upcoming series in Chigago are listed as "To Be Announced". The Phillies haven't declared that Martinez is getting another minor league rehab/sharpening assignment, thus we can all believe that he'll be pitching against the Cubs this week.

Plenty of worry surrounds the decision to potentially move Moyer out of the rotation. Does he get moved to the bullpen? If so, should he be expected to perform effectively? Could they treat him as a cast off, the likes of Geoff Jenkins? Perhaps the answer to all of those questions is NO. A temporary solution could be to place Moyer on the disabled list. Just ask Pedro Martinez...I am sure the Phillies could find something wrong with Jamie in order to make the situation work. Placing Moyer on the DL would help the Phils not have to make an objectionable decision. It might allow everyone to save face. It would enable the Phillies to keep Moyer around the dugout, where he's a help to the club by coaching and guiding the other members of the starting staff, during their games.

I'm sure there have been plenty of phans and media members suggesting that Moyer would be better suited as a coach, at this stage in his career. I am also aware of the affinity that those same phans and media members feel toward Moyer, due to his role in the World Championship 2008 season and his local ties. Placing Jamie Moyer on the disabled list, keeping him on the roster, not insulting or embarrassing him with a demotion, and allowing him to continue to mentor the other starters is the best solution for the Phillies' starting pitching traffic jam, at the moment. Pedro was signed to help the team. Moyer's not helping the team. It's the right move.