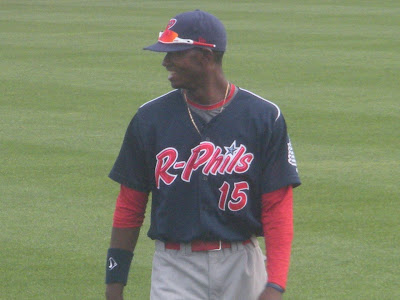 Domonic Brown is one of the Phillies' prized prospects. Brown was rated by Baseball America as the Phillies' top prospect entering the 2009 season. A 2006 draft selection, Brown committed to play football at the University of Miami, prior to being drafted. He's now quickly on the rise and is holding down right field for the double A Reading Phillies. I had a chance to speak with Domonic this week, and here is how that went down...
You're batting .342 since your promotion to Reading? Can I get you to talk about your quick success and trying to stay hot?
I'm just trying to take it one day at a time, really. Come in here, work hard, and stay with the same approach...let the rest take care of itself. There's great pitching here (at double A), they just throw everything for strikes. I'd say that's the big transition from high A (Clearwater)...throwing the curve ball for strikes, the off speed. So, I'm just trying to take it one day at a time (with) the same approach.
Your first homer with Reading last week was quite a shot. Do you think you'll remember your first homerun at each level by the end of the road?
Nah. I plan on hitting so many, hopefully (that I won't remember).
The announcement last week that the team and media had been spelling your name incorrectly (Dominic, instead of Domonic)...can I get an explanation and what was going on? Why did it take so long to get corrected?
I don't know what's going on with that, but it really doesn't matter. People have been doing it most of my life, so it doesn't matter.
A lot of people describe you as a 5-tool player. How would you describe yourself?
I don't know. I really don't look at things like that. I just try to do whatever I can do for the team at that moment, to get us the "W", and I've done my part.
What would you say your strengths are that you are most proud of?
My speed, and the ability to hit gap-to-gap, line-to-line. I think that's my strengths.
If, when you're at the big league level some day, MLB wished to use you to sort of help market baseball toward the black community, in something like the RBI program, would that be something you'd like to participate in?
I want to do a lot of that kind of stuff with the African American community. A lot of that, kind of giving back and being with the kids who are less fortunate than myself.
(A joking question...) What's your best sport besides baseball?
(Receives a joking answer) Hoops! A lot of people think it's football, ya know? Hoops! Nah, it's probably football.
What advice might you give to teenage players who hope to play baseball beyond high school?
If you've got the tools and the ability, keep working hard, stay humble and make sure you listen to your parents.
Who was your favorite player growing up?
Ken Griffey Jr.
What is your favorite baseball movie?
Major League. Willie Mays Hayes- I love that guy. Wesley Snipes!
----------------------------------
Follow PhoulBallz.com on Twitter HERE!