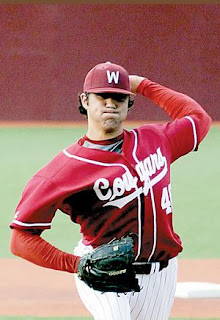 Left handed pitcher Matthew Way is a Phillies 2009 5th round draft pick who has already been promoted out of rookie ball to single A Lakewood. Originally from Alaska, Way went to Washington State, where he enjoyed a successful season this year (8-4, 2.43 ERA, 124 K's, 107 1/3 innings in 16 games). Way is currently 2-1, with a 2.88 ERA through 4 starts for the Lakewood BlueClaws. I caught up with Matthew this week for an interview. Here is how that went down.


Matt, can I get some comments from you on your early success, since you've joined the BlueClaws?

Well, I had two good outings when I first showed up. Basically, the last two have been kind of shaky, but other than that, it hasn't been too much different from where I've been before with the Pac 10 or in Williamsport. Just execute your pitches, keep the ball down and you can do good just about anywhere.


What was your draft experience like this year? How did you find out, who were you with?

I found out early that morning. I was actually still sleeping, just about to wake up to go to class for summer school. I got a call from Tim Kissner, the west coast scout for the Phillies. He was talking to me, said I got drafted, said he'd be up later that week to negotiate and do the signing and everything. Yeah, so I was all by myself, just waking up, getting ready to go to class when I found out. I had a bunch of stuff to do, I had some interviews and stuff to do later that day with local press and then I went and hung out with my friends and celebrated a little bit later that night.


Can I get you to talk a little bit about your senior season at Washington State?

It was a good season. We played well, we got second in the Pac 10. We had a pretty good team, a young team. I look forward to seeing how they do next year. They didn't lose too many (players). It was a solid team, we just didn't show it later on in the regional. We kind of outplayed ourselves at the end.


How has pitching coach Bob Milacki helped you since joining Lakewood?

Oh, tremendous! Just working with grips, mechanics, just overall sequences of pitching, just being a pitcher really. At every level I've gone to, I've met up with a new pitching coach who has been able to show me bigger and better things and different ways of doing things, and going about my business and that's what coach Bob has done here for sure.


Did you get to speak with Brett Myers at all, while he was in Lakewood for his rehab assignment?

I didn't actually. I kind of just stuck to business. He was here to do his thing and got his inning done and threw his bullpens and stuff and he was out of here. It was mainly business as usual. Nobody was bothering him at all. It was just kind of- get your work done.


Do you follow yourself in the media at all since you've become a professional player?

Not really. I just see the stuff that people give me. We get stuff in our lockers sometimes, if there's a story out. My house parents back in Williamsport would cut out some of the stuff for me to check out. Even with that, I didn't see all the stories. There's probably been a lot of stuff up in Alaska written about me, but I haven't paid attention to it too much.


What do you think of New Jersey so far, since you've been here?

I've got some family over here. So, that's about it so far. I haven't seen too much of the place. It's hot and humid. Fans are great.

Bull Durham. It's a funny portrayal of the minor leagues. That's why I like it.