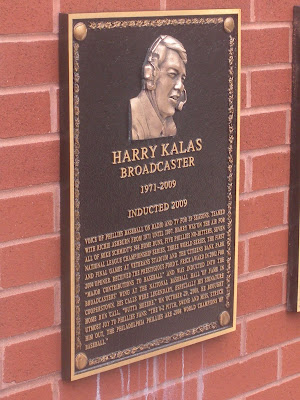 I'll lead with the link to our article about the Harry Kalas Wall of Fame plaque misprint that was updated yesterday. Story is here. I notified the Phillies and apparently no one was aware of the error. Phillies VP of alumni relations Larry Shenk took blame, saying he was responsible for the copy that ended up immortalizing the broadcasting legend. He stated that replacing the plaque would take a lengthy amount of time, but the team would consider the fix.

I'm not Complete-Lee sick of the plays on words yet and neither is Phillies Nation's Amanda. Check the link here.

The Lakewood BlueClaws are having a jersey auction after their game on Sunday, 8/23, to benefit the American Cancer Society. Current and former BlueClaws players' jerseys will be in the mix. Check out BlueClaws Blog for more details.

Phriends of PhoulBallz, SlugTrail Radio, continue their upstart internet radio broadcasts tonight in the 7 o'clock hour. The content is for mature audiences, but you may enjoy some familiar immature guest appearance action.