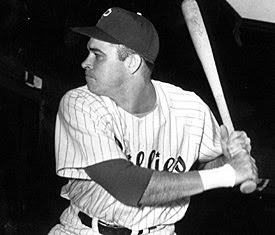 Dick Sisler was a player with the Phillies from 1948-1951. Sisler, was acquired in a trade with the Cardinals as a first baseman, but was moved to the outfield, as his infield defense was not very solid. Sisler was an all star for the 1950 Phillies Whiz Kids squad that went to the World Series. In the 1950 season, Sisler hit 13 homers and had 83 RBI with a .296 batting avg. Those were all personal bests. In May of 1950, Sisler had hits in 8 straight at bats against his ex-team, the Cardinals in St. Louis.

Sisler is best know for hitting the biggest homerun in Phillies history. On the final day of the season, the Phillies faced the Dodgers in Brooklyn. The Phils held a one game lead over Brooklyn for the league crown. Phillies ace Robin Roberts and Dodgers starter Don Newcombe dueled to a 1-1 tie, through nine innings.

Already with 3 hits that day, Dick Sisler came to bat and slugged a 3 run homer into the left field grandstand to push the Phillies ahead 4-1. Roberts would shut the Dodgers down in the bottom of the 10th and Philadelphia won the National League pennant for the first time in 35 years. Dick's father, George, was working as a scout with Brooklyn at the time, and was in the stands to see his son's big time heroics.

Dick Sisler played another season with the Phillies before being traded to the Reds, following the 1951 season. Sisler would finish his playing career back with St. Louis. Later, he coached in the minors and majors before spending time as skipper of the Reds.