I Blog About the Phillies, Oh Yes 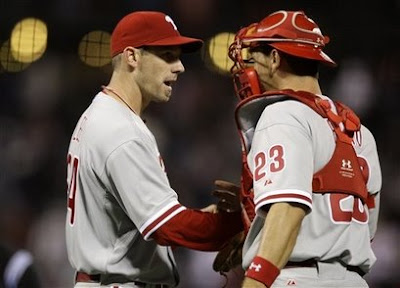 That was love-Lee! 9 innings, 4 hits, 6 strike outs, 2 walks, 1 run, complete game, win. That was quite a first impression. Welcome, once again, to the Phillies, Cliff Lee. Lee even delivered with his bat, getting 2 hits in 4 at bats. His location was absolutely refined as Lee threw nearly 70% of his pitches for strikes in the 5-1 defeat of the Giants.

This was Lee's third complete game in his last four starts. His addition to the pitching staff will surely be a help in the win column, but can also assist the bullpen. The Phils' bullpen has been used a lot this season, and has been depleted with a lot of injuries. The addition of Lee should help use the relievers for less innings, at least once every five days. Furthermore, adding Cliff Lee to the starting rotation means a starter gets added to the bullpen...at least for now.

Scott Lauber confirms that Rodrigo Lopez will be moved to the bullpen, after the addition of Lee. RoLo said, "I think I can pitch as well in the bullpen, but I just feel that I'm good enough to get people out, whether it's coming out of the bullpen or in the rotation."

In other news, Dominic Brown has been promoted to double A Reading. Through 66 games at single A level Clearwater, Brown was batting .303 with 11 homers and 44 RBI with a .903 OPS. Central/South Jersey area phans can see Brown and former ML Phillie Scott Mathieson, who is battling his way back to the majors from multiple Tommy John surgeries, in Trenton, when Reading visits the Thunder August 11-13.

The latest edition of The Sporting News contains a round table Q&A where baseball all-stars are asked questions about the game. Asked which manager, aside from his own, he'd like to play for in his career, Tampa slugger Carlos Pena said, "Charlie Manuel. I don't know if it's because they got the best of us, and I probably wouldn't have said that before the World Series. But I've gotten to know him a bit, and from my perspective and in talking to their players, he seems like a great man. And obviously, with his success, he knows what he's doing."

Major Leaguers in Lakewood! The Lakewood BlueClaws are slated to host Pedro Martinez's bullpen session on Sunday, according to MLB.com and the Philadelphia Inquirer. Lakewood will also host a Darryl Strawberry autograph signing this evening.