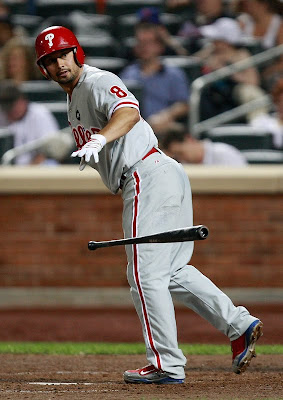 The Braves (67-60) visit Philadelphia for what promises to be a wet 3 games series with the Phillies (73-52) this weekend. The Braves are in second place, tied with the Marlins, 7 games behind the Phillies. Read on, for pitching match ups and other key notes for this series.

Sunday, 8:05pm. Jair Jurrjens (10-8, 2.91 ERA) vs. Joe Blanton (8-6, 3.88 ERA). For some reason, the smarty pants guys at ESPN think the nation wants to see a second prime time Sunday night game between the Braves and Phillies this month, and the third of this season. Not only does the nation not want that, but neither do Phillies phans. Keep the games scheduled during the day, please. Anyway, Jurrjens is 3-2 with a 2.57 ERA in 7 career starts against the Phillies. This season, Jurrjens is 6-0 against the NL East in 10 starts with a 1.79 ERA! Blanton is winless in 5 career starts against Atlanta with a 6.58 ERA. Blanton is 5-3 with a 3.98 ERA at home this season, through 13 starts. Brian McCann is 6-for-13 (.462 avg) with 2 homers in his career against Blanton.


Chipper Jones has more homeruns against the Phillies (42), in his career, than he does against any other team.

Rafael Soriano has a 1-1 career record with 4 saves, a 1.35 ERA and a .111 batting avg. against in 14 games against the Phillies. Soriano has never blown a save against Philadelphia.