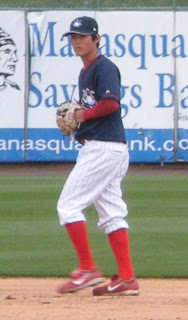 Troy Hanzawa is the starting shortstop for the Phillies single A affiliate in Lakewood. Troy was an 8th round draft selection last year out of San Diego State, where he played for Tony Gwynn. Early last week, Troy was named the Phillies' minor league player of the week, for the previous week when he batted .500 (10-for-20) with a double, a homer and 5 RBI. Troy is batting .275 with 2 homeruns and 36 RBI in 99 games played this season. I spoke with the Hawaii native over the weekend, and here's how that went...

Troy, can I get some comments from you on being named player of the week, last week?
(He was not aware of the honor) What is it, actually? (I explained...) Oh, wow! That's awesome! It's an honor, man.

You spent time playing for current Lakewood manager Dusty Wathan last year in Williamsport. What's Dusty like as a manager?
I love the guy. He's the type of manager- he gets on you, when he has to. He gets the job done. When we've gotta work, we work. But he's laid back for the most part. He's easy to play for.

What was Tony Gwynn like, as a coach, during your time in college?
He is a Hall of Famer...anything he says, you gotta suck it in and try to understand what he's talking about. It was an honor just for me to play for him and be able to have him teach me everything he knows. I learned a great deal from him, so I'm really grateful to him.

Was there any change in the clubhouse atmosphere that you noticed this week after Jason Knapp was traded?
I don't think there was a negative impact OR a positive impact. Ya know, Knapp was a great player and the guys up there who got traded- Donald, Marson and Carrasco from what I hear, they are great players, but as a team, I think we just worry about our own business down here, until it happens for us do be up there and make a difference up there.

What is your second best sport to play?
I love to play basketball and just shoot hoops.

What do you like to do away from the baseball field?
Back home, I'll go the beach and do spear fishing and all that kind of stuff. Up here, relax, play some golf sometimes.

Do you have any comments on the recent Pork Roll, Egg & Cheese between innings race controversy? People say it's rigged.
(Laughs) I think sometimes it IS fixed, you know. I think the fans like Egg a lot, so it might be fixed for Egg to win.
Walk out or entrance music- do you guys get to select your own?
We do get to pick it, but I never really picked one. But they got me with Hawaii Five-O theme song. I don't mind it at all.

What ballpark would you most like to play in some day?
It's gotta be Fenway. Yeah, it's just great, it's one of the last old parks. That would be great. It's kind of an institution. In Greenville (Boston's affiliate), we got to play in the replica, it's pretty much the same thing.