By Jay Floyd August 06, 2009
"Jay" Happ, we're glad you are still a Phillie. Over his last 9 starts, Happ is 4-2 with a 2.11 ERA. Happ has surely proven himself to be a solid starter and stands out as the guy who may be most worthy of the role of 4th starter in a potential playoff series.

Obviously, Jamie Moyer is has struggled this season, with his 5.55 (third worst in the NL of pitchers with over 100 innings pitched) ERA. Happ has shown shades of dominance and "horse status" several times this year (7 starts of 7 innings or greater...in four of those, he did not allow a run), while Moyer has not (he has only two outings of 7 innings this season...1 of which was scoreless).
Happ has made a case for himself to continue starting and has displayed his strength. Pedro Martinez, who management still asserts was signed to become a starter, threw 6 innings, gave up 2 earned runs, and struck out 11 in his rehab game Wednesday night with Reading. Pedro is obviously preparing to start. Moyer refused to comment on the possibility of losing his spot in the rotation after surrendering 6 earned runs in 5 innings pitched against the Rockies on Tuesday. We should know next week how things will fit together for the stretch run toward the playoffs. My support goes to Happ remaining a starter. 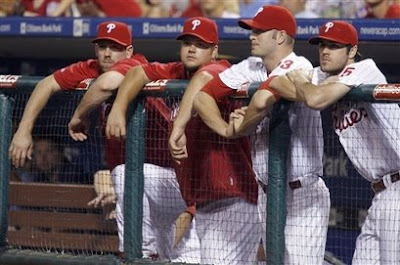 In other rehab news...Chad Durbin threw a scoreless inning for Clearwater on Wednesday. He allowed one hit and walked one batter while striking out two.