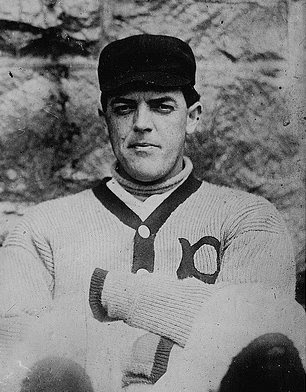 Earl Moore was a pitcher with the Phillies from 1908-1913. Early in his career, Moore spent five season playing for Cleveland, where he was a consistent winner. In 1903, he won 19 games and led the American League with a 1.77 ERA. Moore's nickname was "Crossfire", based on his sidearm delivery. In his first five years with Cleveland, Moore threw 15 shutouts. A foot injury caused Moore to miss much of the 1906 season. Moore was considered an after thought by many, after a demotion to the minors, but was signed by the Phillies in late 1908.

Moore quickly paid off for the Phillies, as he shut out the Reds 5-0 and threw three consecutive complete games. He also threw 26 straight scoreless innings. In his first full season with our Phillies, Moore became the ace of the Phillies' staff, in 1909. That season, he threw 299 2/3 innings, and led the team with 18 wins and a 2.10 ERA. He also had four shut outs that season.

Moore's 1910 season was the best of career. His record was 22-15 with an ERA of 2.58 and 18 complete games. He also led the National League in strike outs (185) and 6 shut outs that season. Moore did struggle that season however. By mid-June, his record stood at 3-7. Moore quickly turned things around by shutting out the Braves and Giants consecutively and then reeling off 11 victories over his next 12 starts.

In 1911, Moore pitched over 300 innings and threw five shut outs, but his record fell to 15-19. Those 19 losses led the NL. The following season, Moore broke a bone in his pitching hand trying to field a batted ball in late May. The injury kept Moore out of action for much of the 1912 season, when he struggled and finished the season 9-14.

In 1913, Moore's contract was sold to the Cubs in July, after a 1-3 start. He threw in the Federal League with Buffalo in 1914, before retiring.

Don't forget to check out Fox Sports 1310am online.