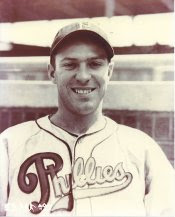 Danny Litwhiler was an outfielder with the Phillies from 1940-1943. Signed as a free agent in 1940, the native Pennsylvanian join the Phillies and made his Major League debut that season. Litwhiler quickly proved to be a smart addition for the Phillies, slugging 5 homers and batting .345 and rattling off a 21-game hitting streak in 36 games played that season.

The following year, in 1941, Litwhiler's output continued to be solid, as he led the team in homeruns, with 18, and batted .305. In 1942, Litwhiler played much of the 2nd half of the season with an injured shoulder, but still managed to become the first Major Leaguer to play an entire season without making a single error. While the injury did not effect his performance in the field, it resulted in a reduction in power, as his season homerun total was trimmed in half, down to 9. Riding his reputation as the Phillies' premiere slugger from the previous season, Litwhiler made the National League all-star team in 1942.

On June 1st, 1943, the Phillies traded Litwhiler to the Cardinals, along with outfielder/pitcher Earl Naylor, for Dain Clay, Buster Adams and Coaker Triplett. With St. Louis, Litwhiler would play in two straight World Series, winning one.

Later in his career, Litwhiler would also play for the Braves and the Reds. In 1951, at age 34, Litwhiler's playing days were over but his best contributions to the game were yet to come.

While coaching college, Litwhiler began developing many tools that are now commonplace around baseball. He introduced the radar gun as a means to measure pitch speed, assisted in the development of Diamond Grit, a material used to dry soaked infield dirt, and pioneered the use of multiple instructional gadgets that taught fundamentals of baseball to young players.

mark evans said…
Thanks for the lesson, I'd never heard of the man.

I'm wondering if numbers from the WWII years may be skewed. On a side not, has anyone compiled a list of all players who spent time with the Phillies, and were killed in action during WWII and subsequent wars?
June 7, 2010 at 11:52 AM