Daulton to Be Honored on Phillies Wall of Fame 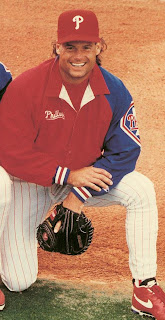 Darren "Dutch" Daulton, who was a 25th round draft selection by the Phillies in 1980 and helped lead the 1993 team to the World Series, will be honored by the Phillies on August 6th as the latest Phillie to be enducted into the Phillies Wall of Fame.

Daulton was a three-time All-star as a Phillies (1992, 1993 and 1995). He led the National League in RBI in 1992 with 109. Daulton was behind the dish for Terry Mulholland's no-hitter against the Giants on August 15, 1990. Also, he played 965 games at catcher for the Phillies in his career, which is 4th in team history, behind Mike Lieberthal, Red Dooin and Bob Boone.

Looking at Daulton's overall Phillies career statistics (1109 games, .245 avg., 134 HR, 567 RBI, 48 steals, 489 runs), there is nothing overly impressive about them. "Dutch" is simply an icon in Phillies lore because he was the home grown guy who led the beloved group of cast-offs, including Mitch Williams, John Kruk, Lenny Dykstra, Danny Jackson and Pete Incaviglia, to the 1993 National League pennant. Daulton will be the first player from that 1993 Phillies squad to honored on the Phillies Wall of Fame. And surely, the 1993 Phillies deserve to be honored in some way, so if Daulton is the token honoree to represent that legendary season, then so be it.

The tradition of honoring Phillies alumni began in 1978 at Veterans Stadium, when Robin Roberts became the very first man to be given the distinction by the Philadelphia baseball club. Phillies players with 5 or more seasons of service are eligible, while managers and coaches are required to have 4 or more years of service. Harry Halas was recognized on the Wall last season.