Where is He Now? Eric Junge Edition 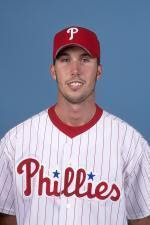 Hey, you remember Eric Junge, don't you? He was the guy who the Phillies acquired after the 2001 season from the Dodgers for Omar Daal. Well, Junge, a Bucknell graduate, hasn't pitched in the Major Leagues since he was with the Phillies in 2003, but he's still a professional pitcher.

As a member of the Phillies, Junge made his Major League debut on September 11th, 2002. Three days later he earned his first big league win in a game against the Pirates in Philadelphia. Less than a week later, also at home, Junge got his only other decision in the Majors, a win against the Braves, in a game that Tom Glavine lost. Junge appeared in 6 games for the Phillies in 2003, all in relief. In 10 games in the minors in 2003, Junge posted a 3.06 ERA.

In 2004, at three different levels in the minors for the Phillies, Junge posted a 0-6 record over 16 games (12 starts) with an 8.59 ERA. After dealing with injuries and struggling on the mound that season, Junge was granted free agency. Junge would then spend time in the minors with the Metropolitans, Padres and Yankees, over the next few seasons.

In 2008, Junge began his own personal pitching tour of Asia when he signed with Orix of Japan's Pacific League. Then, in 2009, after pitching for the independent Lancaster Barnstormers, Junge would pitch with the Hanwha Eagles in Korea. And currently, Junge is a starting pitcher in the Chinese professional league with the Sinon Bulls.

Junge also pitched in the Venezuelan winter league with Magallanes and pitched this year in the Caribbean World Series.

While unsuccessfully hunting through Chinese characters and attempting to translate statistical abbreviations to bring Eric Junge's recent numbers to PhoulBallz readers, I stumbled upon some statistical fun on the Chinese Professional Baseball League's official site.

Yes, you betcha...Chinese baseball has interesting statistics like "I face the fight", "Four intentionally bad" and "touch body ball". That place should change its name to The People's Republic of Awesomeness.