Tough Times Ahead- Polanco and Utley to DL 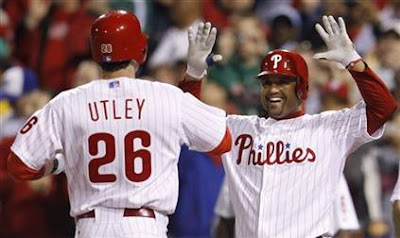 The Phillies announced today that both Placido Polanco and Chase Utley are headed to the disabled list with injuries. Polanco has been dealing with a left elbow issue since April, when he was hit in the elbow by a pitch from Braves pitcher Tim Hudson. Polanco may also have a loose bone fragment in the joint that would require off-season surgery. Utley, who injured himself sliding into second base in the 4th inning of Monday night's game against the Reds attempting to stretch a single into a double, was examined today and MRI results are pending, but the team has described Utley's issue as a sprain of the thumb on his right hand.
Both Polanco and Utley are the leaders in National League All-star voting at their respective positions.
The Phillies, who have been revaged by injuries this season, have had their proposed lineup 1-8 of Rollins, Polanco, Utley, Howard, Werth, Ibanez, Victorino and Ruiz together just five times through 74 games this season. They've also dealt with injuries to several key members of their pitching staff, including "Jay" Happ, Joe Blanton, Ryan Madson and Brad Lidge. As things stand now, the Phillies (40-34) are 3 1/2 games behind the first place Braves and 2 games behind the wild card leading Metropolitans.
Brian Bocock, who was claimed off waivers from the Giants last offseason, and veteran reserve Greg Dobbs have been promoted to the big club, filling the voids left by Polanco and Utley. The 25-year-old Bocock was batting .179 through 65 games at Triple-A Lehigh Valley this season. Dobbs batted .152 in 42 games with the Phillies this season, before accepting an assignment to Lehigh Valley last week.
Initial reactions from area phans might include great concern over the standings and worry about how the Phillies could possible overtake the Braves and Metropolitans in the standings now. Included in all the hysterical heed given to these matters will be people suggesting that the Phillies call it a season and begin taking offers for free-agent-to-be Jayson Werth. Don't bail out just yet, pholks. The Phillies overcame a considerable deficit in the NL East standings as recently as 2007, when they overtook the Metropolitans' 7 game lead with just 17 games left to play. There is plenty of time left in the season. Impossible is nothing, when it comes to the Phillies.
___________________________